“In the earliest days of the virus, China locked down travel domestically while allowing flights to leave China and infect the world. China condemned my travel ban on their country, even as they canceled domestic flights and locked citizens in their homes. The Chinese government and the World Health Organization — which is virtually controlled by China — falsely declared that there was no evidence of human-to-human transmission. Later, they falsely said people without symptoms would not spread the disease. The United Nations must hold China accountable for their actions.” – President Trump

Democrats continue to politicize the pandemic and are now on their latest attempt to undermine President Trump. Last week, liberal Governors Andrew Cuomo of New York and Gretchen Whitmer of Michigan called for a congressional inquiry into President Trump’s handling of coronavirus, yet they won’t answer for their deadly “must admit” nursing home orders.

On Wednesday, September 23, Federal Reserve Chairman Jerome Powell testified before SSOCC on our nation’s fiscal outlook amid the pandemic. Under the Trump administration, we are witnessing the great American comeback. We’ve gained 10.6 million jobs since April and Chairman Powell noted that “the economy’s recovered faster than expected.”

On Friday, October 2, Health and Human Services Secretary Alex Azar will testify before the SSOCC regarding his Department’s efforts to deploy lifesaving COVID-19 therapies and vaccines to protect lives.

FDA Authorizes First Point-of-Care Antibody Test for COVID-19: On September 23, the FDA issued an emergency use authorization for the first antibody point-of-care test for COVID-19 to enable more timely and convenient test results for individuals who want to know if they have been previously infected with the virus that causes COVID-19.

New Report on CCP and WHO’s Role in the Spread of the Coronavirus: The Minority on the House Committee on Foreign Affairs issued a report titled, “The Origins of the COVID-19 Global Pandemic, Including the Roles of the Chinese Communist Party and World Health Organization.” The report concludes that the coronavirus likely could have been prevented if the CCP acted more transparently and the WHO wasn’t complicit in the spread and normalization of the CCP’s propaganda and disinformation.

Republican Whip and Select Subcommittee Ranking Member Steve Scalise (R-La.) blasts Governors Cuomo and Whitmer for playing politics and refusing to take responsibility for their deadly “must admit” orders that resulted in the deaths of thousands of nursing home patients. 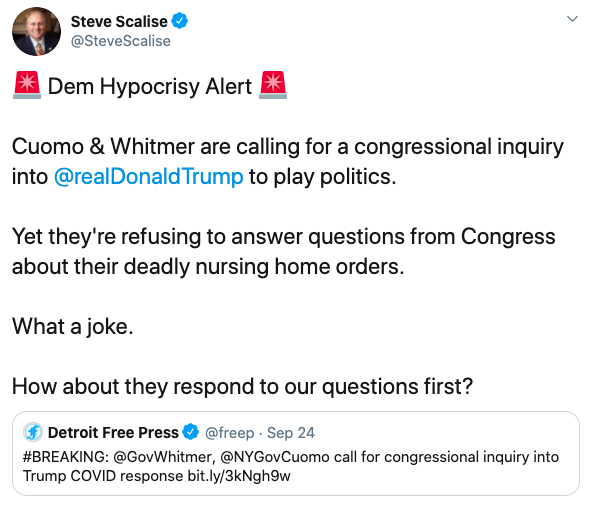 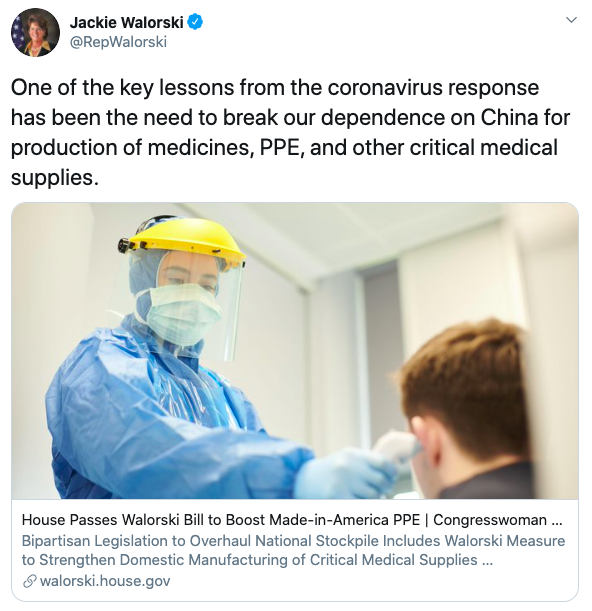 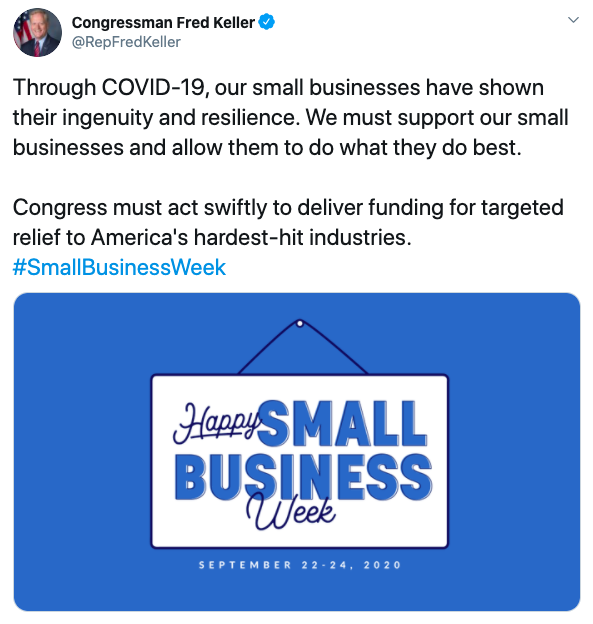 The House Republican Conference notes that PPP has supported over 51 million jobs and calls on House Democrats to stop playing politics with critical aid. 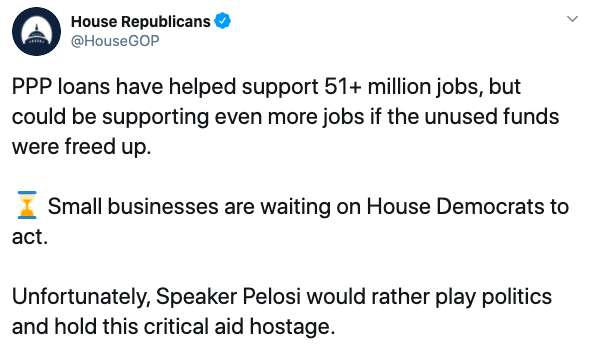 Select Subcommittee Republicans note that the science shows that school coronavirus rates are much lower than those in surrounding communities. 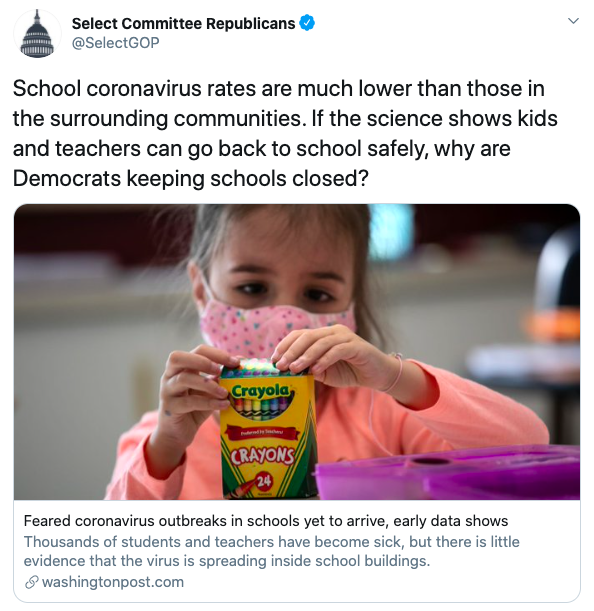 Representative Mark Green (R-Tenn.) underscores that the CDC has stressed the importance of children returning to school. 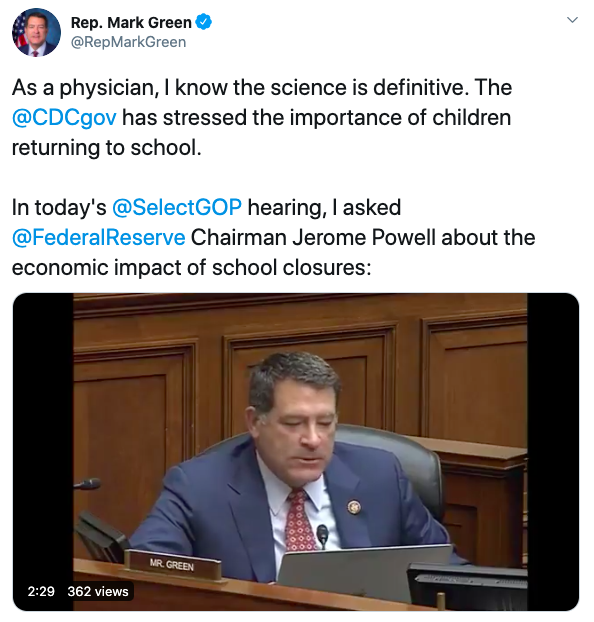 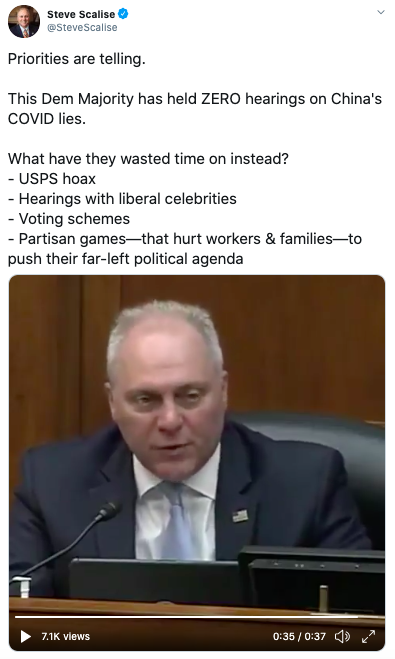 Representative Mark Green (R-Tenn.) highlights a report produced by the Republicans on the House Foreign Affairs Committee showing the CCP hid their knowledge about the coronavirus. 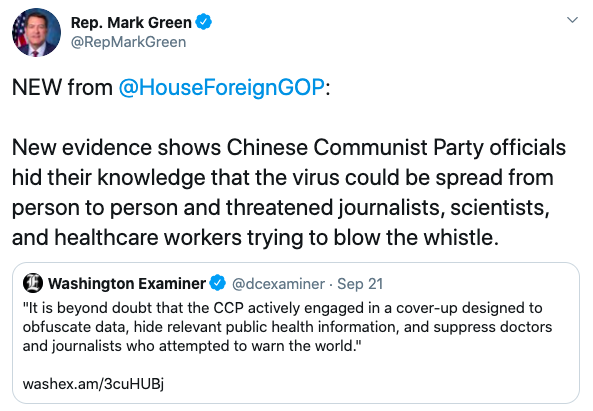