TOPLINE: As Democrats gear up for another political witch hunt, Republicans are determined to keep the Select Subcommittee on the Coronavirus Crisis focused on addressing China’s cover-up, combatting the virus, and reopening our economy.

Over 70,000 Americans have died. Over 30 million Americans have lost their jobs. Millions of small businesses are on the brink. Local hospitals are overwhelmed with coronavirus patients and experiencing a crippling loss of revenue from the cancellation of elective surgeries. Education from the highest to the lowest levels has been disrupted.

Democrats want to use the Select Subcommittee on the Coronavirus Crisis to pin this global pandemic on President Trump. We cannot let that blatant partisanship and cynicism happen. As Ranking Member, Whip Scalise will prioritize three main areas of concern:

Chinese Communist Party (CCP) leaders took aggressive steps to hide information about coronavirus from the world. The Chinese government owes the American people more than an apology. The Subcommittee on the Coronavirus Crisis must determine the facts on the origin of the virus and the Chinese government’s subsequent cover-up. Recommendations should be made to reduce the influence of bad actors globally and prevent another pandemic.

The subcommittee can build upon steps Republican leaders have already taken to address Chinese influence in the United States and abroad:

Republicans on the House Foreign Affairs Committee also assembled the following timeline of the Chinese Communist Party’s cover-up of the coronavirus crisis dating back to October, 2019: 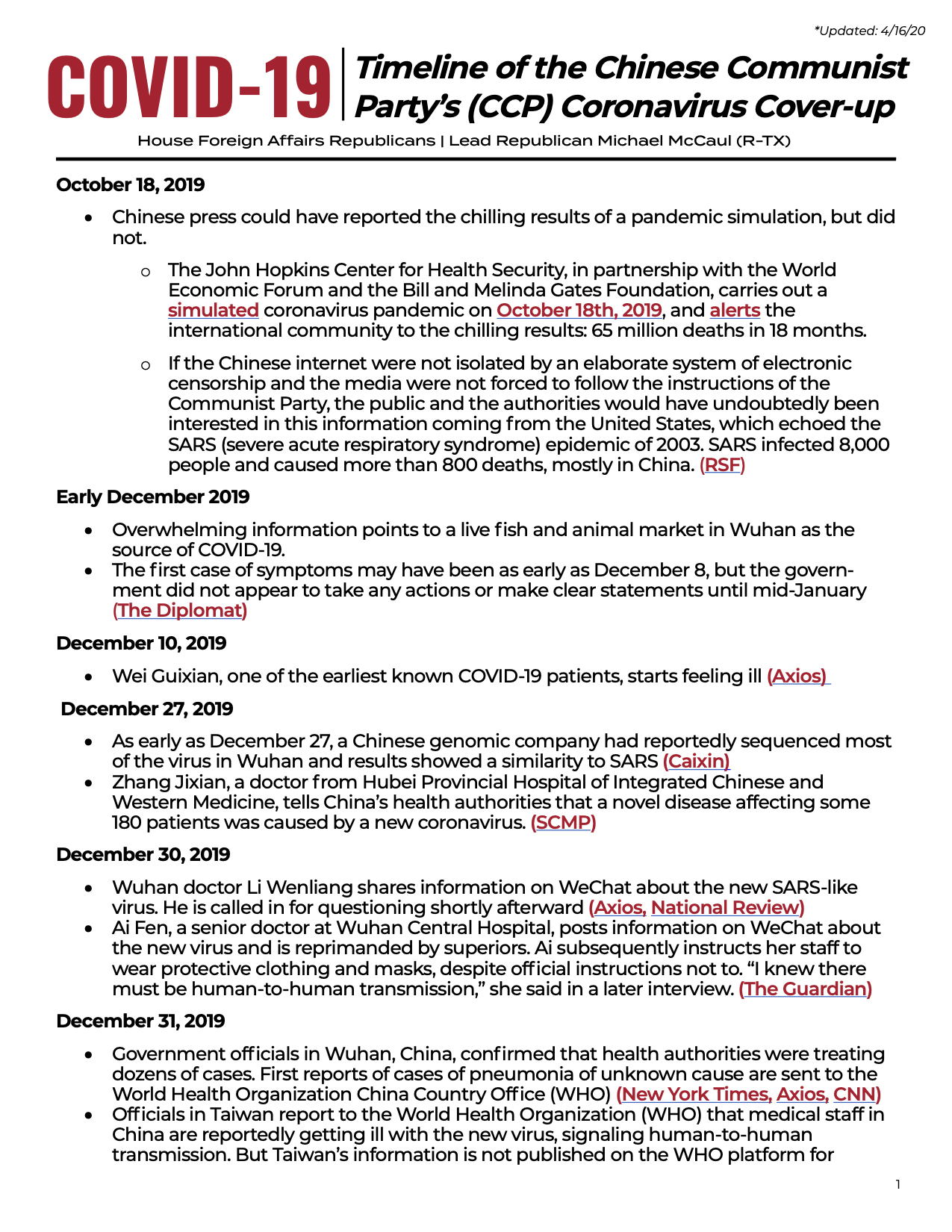 Click here or on the image above to view the timeline.

The Trump Administration has led the way on the largest relief effort in American history. While Democrats will no doubt try to tear down these efforts and paint them as corporate handouts, the facts show that we stood by American small businesses and saved millions of jobs. Our work can make these programs more successful over the long run.

The American people do not want endless relief measures – they want an economic recovery.

American workers and families want to see our plan to safely reopen the country and rebuild our great economy. Under President Trump’s leadership, our work on the subcommittee can help show people how we can use safer and smarter approaches to reopen our country and our economy.

Everyone from small business owners, heads of major hospitals, doctors, CEOs, and sports executives have great and specific ideas for how to get their industries reopened in a safe and smart way. With these commonsense measures and a united effort, we can get back to our new normal. We must show America how it can be done.

BOTTOM LINE: This virus attacked our nation. We can use the Subcommittee on the Coronavirus Crisis to fight back or we can use it to pin blame on our domestic political opponents. Republicans will focus on practical solutions to reopen our economy and prevent another pandemic. Democrats should join us.