WASHINGTON, D.C.—House Republican Whip Steve Scalise (R-La.) joined Fox News Channel’s Your World with Neil Cavuto to discuss the need for the conference committee to find an agreement on government funding that secures the border. Whip Scalise called on Speaker Nancy Pelosi (D-Calif.) and all Democrats to put partisanship and personalities aside, realize the risks of open borders, and work with Republicans to secure America’s border. 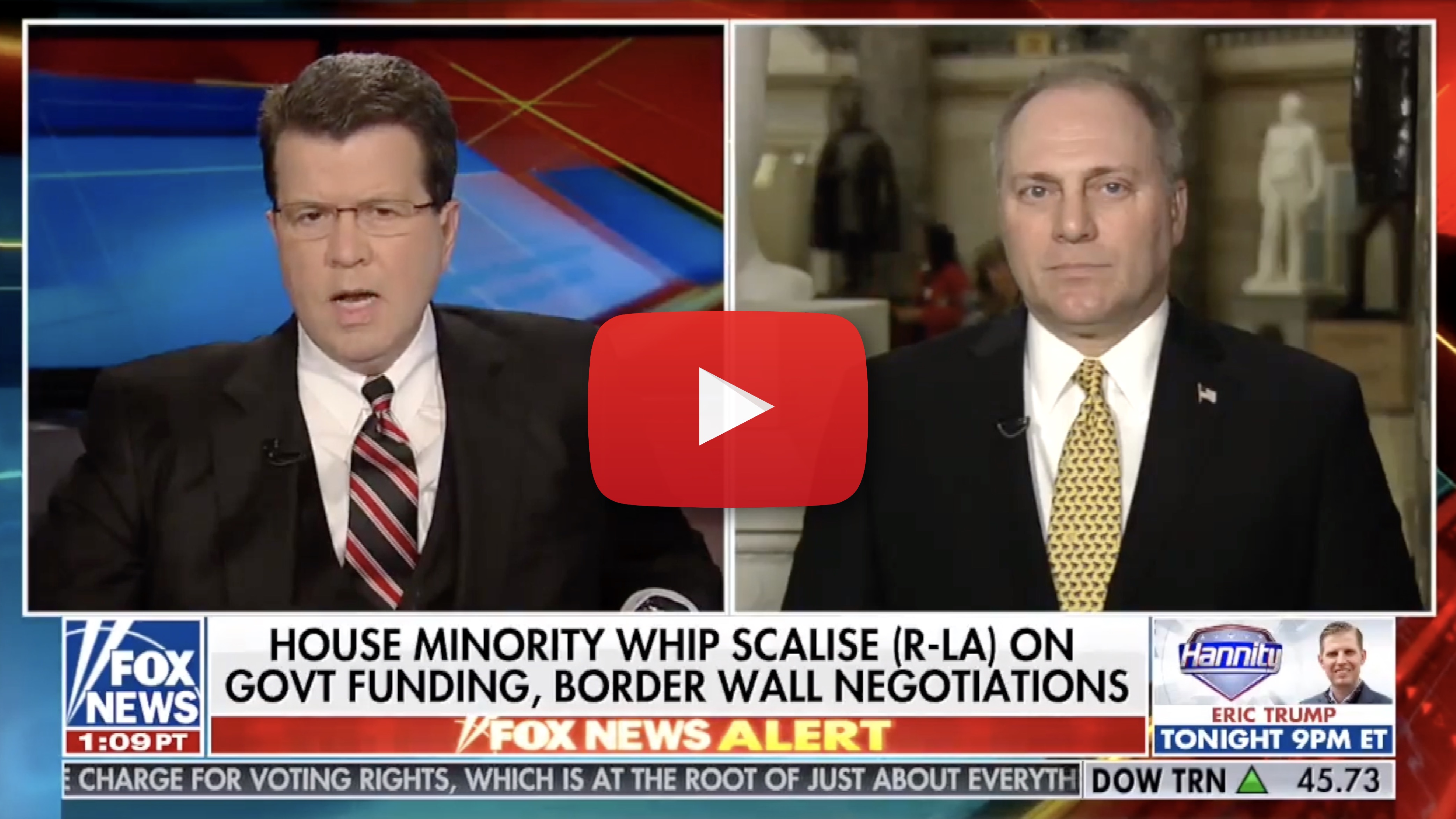 On the need for Speaker Pelosi to finally negotiate on border security:

“It’s got to be a serious, credible offer. The only offer she put on the table till now is a dollar. It was a ludicrous gesture. A few weeks ago, she said she would support a dollar for border security. Let’s talk seriously; what is your offer? If it’s not $5.7 billion, which is what the experts say, then what is your number and how do you back it up? Are you willing to secure the border and give our border patrol agents, our ICE agents, the tools that they need?”

On Speaker Pelosi’s move to cater to the far left while more Congressional Democrats are supporting border security:

“We started seeing, in the last few weeks, more and more Democrats coming to our side. Even Steny Hoyer, the Majority Leader, said physical barriers ought to be a part of the solution. While Nancy Pelosi is catering to the far left elements of her base, most Americans recognize you have to secure the border. The open borders crowd on the left might be representing a narrow element of the liberal base, but most Americans want to secure the border. We’re the most generous nation in the world on immigration. We let more than a million people in a year legally. We have to secure the border to stop the drugs and the criminal elements that are coming into our country every single day.”

On the importance of President Trump making his case for border security at the State of the Union:

“I think that’s why it’s so important that the President lay this case out next week, on February 5th. I think you’re going to see a heightened number—millions of Americans—watching the State of Union that don’t normally watch it because they’re hearing about this back and forth. What is this really about? What is the debate about? They’ll see President Trump laying out the case for securing America’s border—what it’s going to take and exactly what happens every day. There are bad things that happen every day that most Americans never hear about it. Let’s lay that case out and then we’ll see where everybody will be. If Democrats want to stick with Nancy Pelosi and be for open borders, I think they’re going to be on the wrong side of history on this argument.”

On calling for the conference committee to put partisanship and personalities aside to find an agreement:

“… The President said, ‘I don’t need a sea-to-shining-sea wall.’ But there’s about 550 miles of completely unprotected area, where we know bad things—drugs, human trafficking, even murderers—come across the border. Let’s start focusing on those areas.

“If Nancy Pelosi really doesn’t want a wall, President Trump said, ‘Hey, I’ll be willing to let you put in language that bans cement wall, but have some form of physical barriers.’ The steel slat barriers are what the experts say work the best. Let the experts figure that out. You don’t need Washington politicians telling you how to build a physical barrier to protect America and keep us safe. Let the people who risk their lives keeping us safe do the best job with the money that they need.

“Let’s have that debate. There’s a conference committee now. Let the Republicans and Democrats, House and Senate members of that conference committee start the work today. They have a few weeks to do this. I think we can solve this in a matter of hours if everybody gets in the room and puts the partisanship and the personality differences on the side. This is about keeping America safe. Let’s get it done.”