Whip Scalise emphasized how Speaker Pelosi and House Democrats refuse to work alongside President Trump on behalf of the American people. Despite the obstruction, President Trump along with House Republicans are focused on addressing the real problems that face regular Americans. 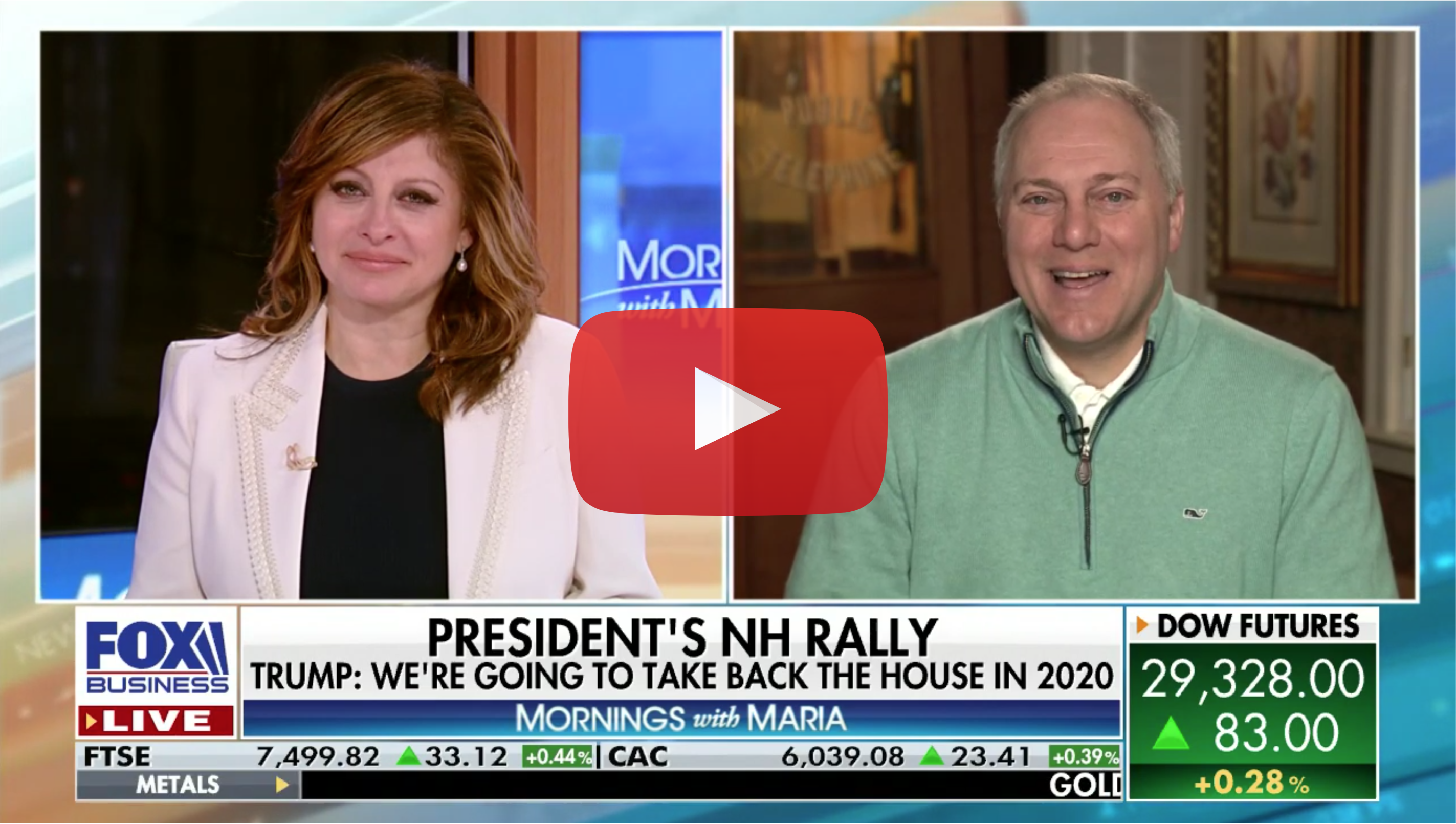 On President Trump’s historic achievements for the U.S. economy:

“I think it just shows you when you watch the State of the Union, especially, and the President’s talking about all these great indicators. And, you know, we had a great jobs report, by the way, come out at the end of last week that probably got overshadowed. Over 200,000 new jobs created. Again, you’re seeing record numbers of job creation. When the President talked about how every different sector of our economy, every different segment of this country has a better chance at the American dream, maybe than ever before. Whether it’s African American unemployment, Hispanic unemployment, Asian unemployment at an all-time low. Women-owned businesses on double digit increases. Everybody is participating in this recovery that wants to get out there and be a part of the American dream again. And with this sign that the chances for recession are even lower because the economy continues to be strong, that’s going to be the dominant force in this election where the President wants to keep this going and so, the best is yet to come. And the Democrats want to move towards socialism, Maria. I don’t think this country is a socialist nation, it never will be. This election, I think, is going to be a great contrast to show what we are doing with a free economy, a growing economy, versus where [Democrats] want to go with government control of your life.”

On the priorities of House Republicans that will keep our economy strong:

“The first priority is to focus on lowering healthcare costs, prescription drug prices. We had a lot of legislation teed up that was very bipartisan to lower drug prices Maria, and Speaker Pelosi won’t bring those kinds of packages of bills to the [House Floor]. I think if you look at trade deals, you and I talked a lot about USMCA, and you saw it drag on at least six months longer than it should have. There are more trade deals out there to be had, you know, something that can help get this economy growing even stronger. Our European allies, our Asian allies, want to get trade deals with us now that they have seen Canada and Mexico get better relationships. But then China, we all know taking on China has been necessary. President Trump just signed Phase One of an agreement, but we’ve got to hold them accountable and make sure they play by the same rules as everybody else. And I think as you see that move forward, and we address it, I think again, there is even more growth in this economy to come from that.”

On Speaker Pelosi’s refusal to work with President Trump on behalf of the American people:

“[Speaker Pelosi] did not show a willingness to want to work with the President. At the beginning of last year when she took over as Speaker, the President talked about infrastructure. There’s a lot of interest in infrastructure on both sides of the aisle and the ability to get that done. There is something there to get done. And again, she has got to show a willingness to work with [President Trump]. It took her over six months to bring USMCA to the [House Floor] when it’s virtually the same agreement that he negotiated with Mexico and Canada, she just didn’t want him to get a win. The same thing can be said for prescription drugs, [there are] a lot of things out there to do. If she doesn’t want to do them, that’s fine. [Republicans] will do that when we take over the House by the end of this year.”