WASHINGTON, D.C.—House Republican Whip Steve Scalise (R-La.) joined Fox News Channel’s The Ingraham Angle last night to discuss Speaker Pelosi’s embarrassing rush to impeach President Trump because Democrats’ failing majority cannot compete with the unparalleled results the President has accomplished for our country. Whip Scalise blasted House Democrats for their complete disregard of facts or the truth as they march towards impeachment with no new information, and no evidence that President Trump committed impeachable offenses. 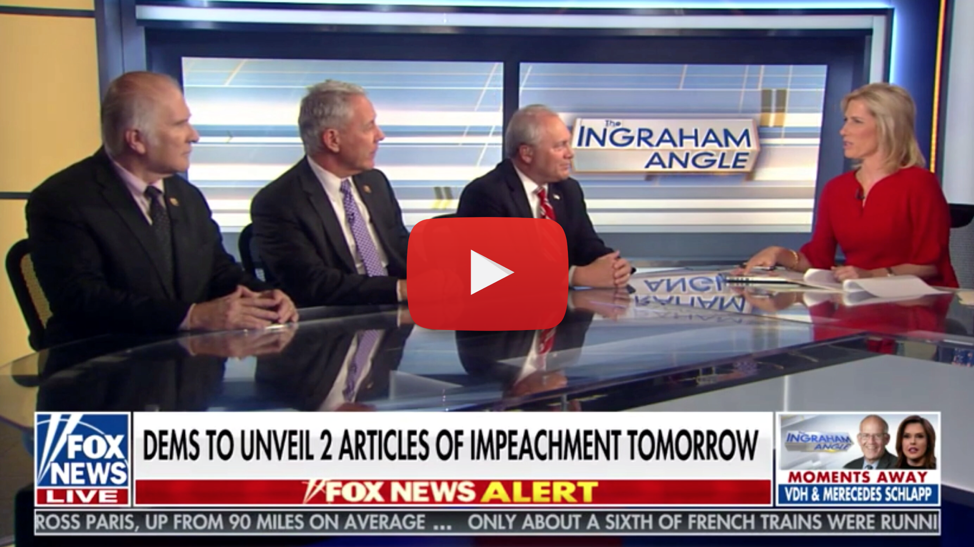 On Speaker Pelosi’s rush towards impeachment in an attempt to protect Democrats’ failing majority:

“When a witness literally gets up from the witness table, runs over to the dais, and then asks another witness questions, people are just looking – they’re not looking, they’re turning this off – they’re tuning this out, because I think they realize this is all about Nancy Pelosi holding on to power. They know that Donald Trump’s done a great job – 260,000 new jobs created last month. [Democrats] don’t want this President to get reelected, they can’t beat him on the merits, and so they’ve got to go down the road of impeachment and that’s what this is about, it’s a farce, it’s an embarrassment what they’ve been doing.”

“Hiding the whistleblower after saying he was going to bring the whistleblower. You know, going back to the Mueller investigation, ‘more than circumstantial evidence’ he said he had, he never had any because there wasn’t any. Really, if you look at what happened last week, you want to talk about something Laura, it’s an abuse of power. We found out later [Adam Schiff] was spying on members of the press, Members of Congress, we don’t know who else. I’ve heard reports that there are up to 3,500 pages of telephone records that Adam Schiff is sitting on, and he only selectively released it against his political opponents. Against Devin Nunes, against a conservative reporter. Why isn’t the press outraged, by the way, that he’s spying on members of the press? Their sources, all of their private information is at risk. The FISA Court itself is at risk when you talk about the abuses of power we saw from the FBI.”

On Democrats’ mission to impeach President Trump from day one, despite any evidence of an impeachable offense:

“[The lead author of the Articles of Impeachment, Rep. Al Green] also said you don’t need an impeachable offense to impeach a President. And, most importantly, he said ‘if we don’t impeach President Trump, he’ll get reelected.’ It’s not about any impeachable offenses, it’s about the fact they’re scared he’ll get reelected because their field is so weak and President Trump has done such a great job.”