TOPLINE: President Biden has announced a $2.25 trillion “social justice” and “climate justice” initiative masquerading as an infrastructure plan where only six percent actually goes to roads and bridges. This trojan-horse, so-called infrastructure package will raise taxes, hurt the U.S. economy, advance unrelated, radical leftist policy, and dramatically increase the size of the government.

Despite passing a far-left $1.9 trillion spending bill that did little to address the negative impacts of COVID-19, the Democrats are doubling down with a radical new proposal under the guise of infrastructure reform that has little to do with rebuilding our crumbling roads, bridges, and tunnels. 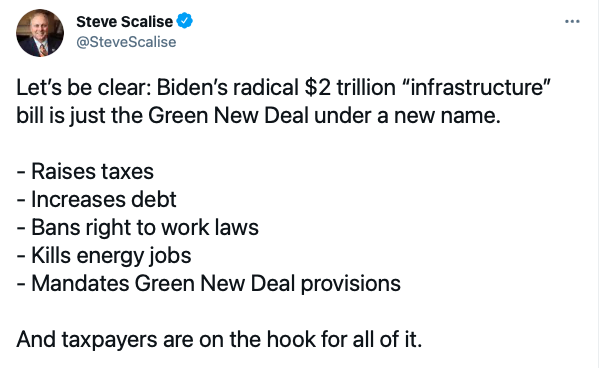 According to the Wall Street Journal, of Biden’s $2.25 trillion agenda, his plan only allocates $115 billion toward traditional public transportation systems, $25 billion for airports, and $17 billion for waterways.

This equates to six percent of the entire bill going to bridges, highways, and roads. 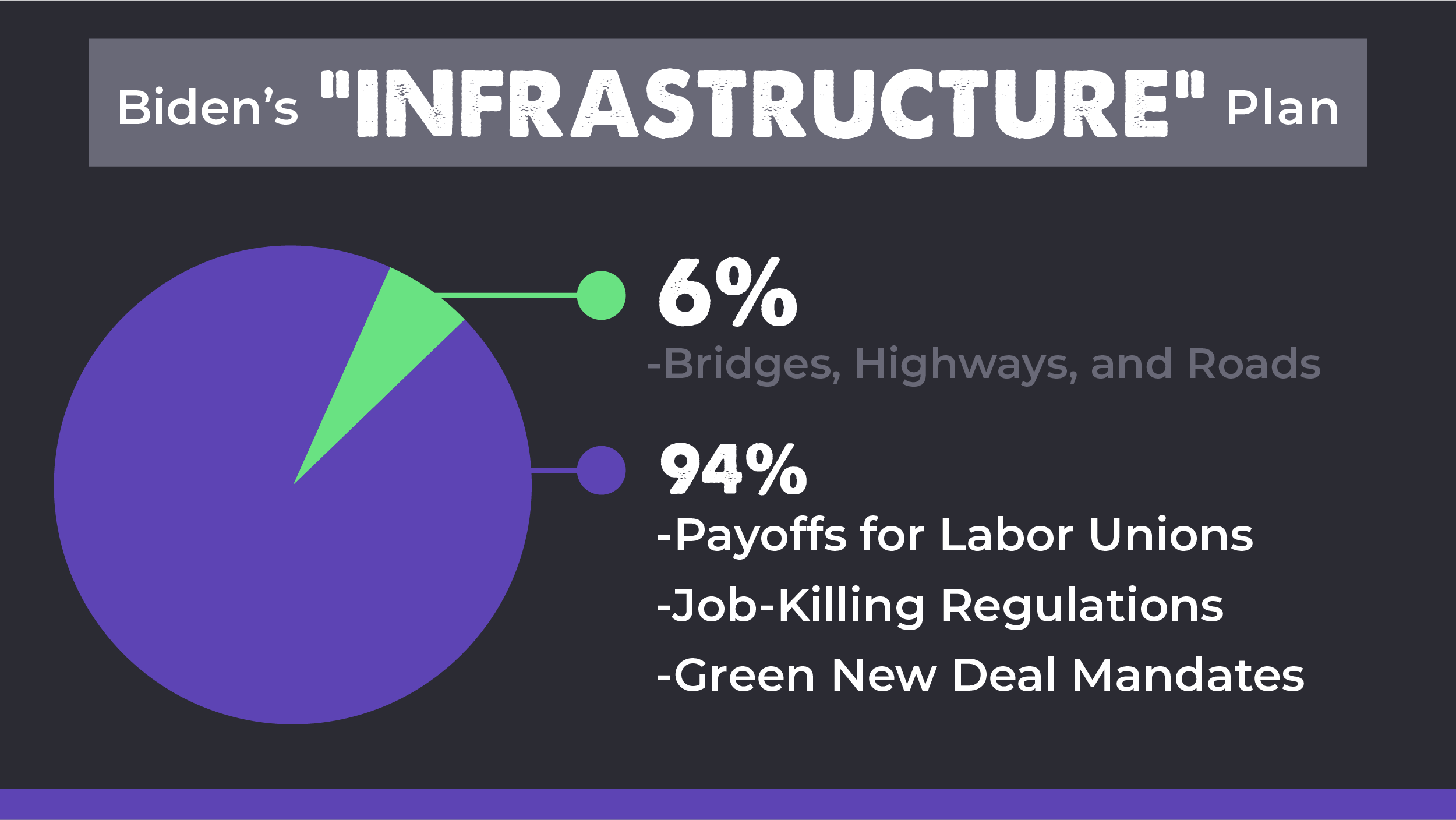 The deceitful messaging by the Democrats doesn’t change what this bill is: using taxpayer money to implement radical energy and social policies.

The Wall Street Journal writes that “[Biden] promises to target 40% of ‘climate and clean’ investments ‘to disadvantaged communities’ —defined in part by race— and tie federal spending to union prevailing wages.”

The Biden Administration is more than happy to take hard-working Americans’ money and use it to fund their far-left wish list.

To pay for this socialist scheme, the Biden Administration is choosing to raise the corporate tax rate in America from 21 percent to 28 percent, which will drastically hurt businesses and workers in the United States.

The Tax Foundation found that President Biden’s corporate tax increase will “reduce long-run economic output by 0.8 percent, eliminate 159,000 jobs, and reduce wages by 0.7 percent.” As Democrats expand their big-government agenda by raising taxes, companies based in the United States will begin to outsource work or move entirely to cut costs, drastically hurting our economy and the American worker.

Even some Democrats are rightly worried about what will happen to our businesses if the tax on businesses goes up to 28 percent. Axios reports that Democrat Reps. Scott Peters of California and Josh Gottheimer of New Jersey think that Biden’s 28 percent increase is too high.

Raising taxes on businesses will drastically hurt the U.S. economy and make our combined corporate tax rate higher than the rate in communist China. With Biden’s new infrastructure package, it would be less expensive for companies to do business in China than if they stay on American soil. Why would President Biden want to encourage U.S. companies to move to China? 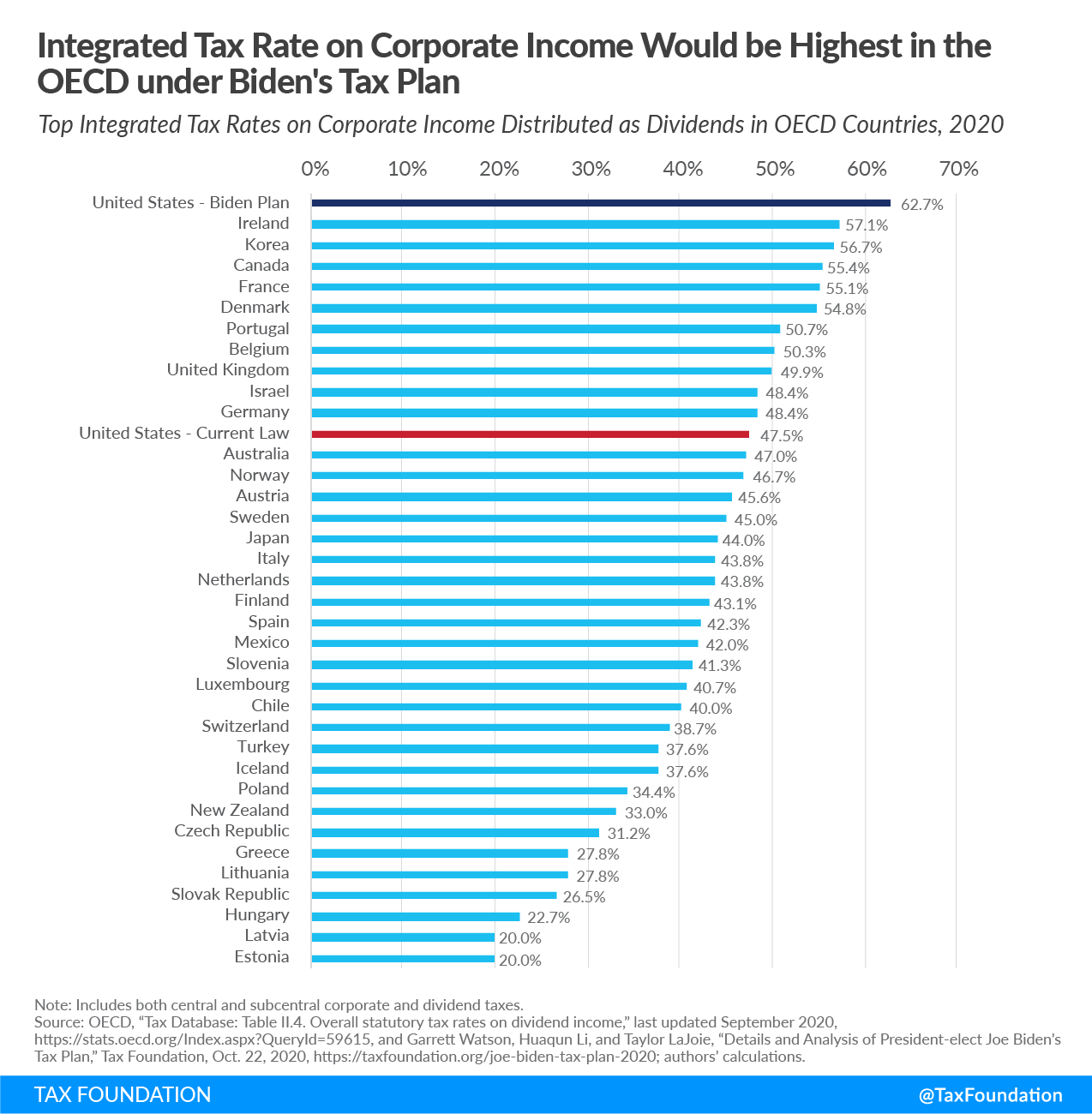 The current tax rates on corporations put America in the middle of the pack globally for the Organization for Economic Cooperation and Development (OECD). With President Biden’s proposed tax plan, the United States would be leading the OECD with the highest corporate income tax rate. By having the highest tax rate in the OECD, the United States will be less competitive, and corporations will be more likely to move their headquarters where they will be taxed less, but there will be fewer American jobs.

Biden Is Breaking His Campaign Promise to Protect Middle-Class Families

When he ran for President, Joe Biden promised that his agenda would not harm middle-class families. He lied. By raising taxes, companies will lay off workers and reduce wages to accommodate revenue loss.

The Heritage Foundation reports that workers will suffer because the “majority of the economic burden of the corporate income tax in the form of lower wages. Labor bears between 75 percent and 100 percent of the cost of the corporate tax.”

Democrats Do Not Care About Fiscal Responsibility

The Democrats have never been the party of fiscal responsibility, and this new infrastructure bill highlights that more now than ever. After forcing through a partisan, financially irresponsible $1.9 trillion spending package that had little to do with COVID, the Biden Administration wants to continue to spend trillions of dollars to fund their far-left progressive agenda disguised as rebuilding our outdated transportation system.

After an economically devastating pandemic, Americans are just now getting back on their feet. Instead of allowing people to continue building up personal finances, the Biden Administration plans to enact policies that will reduce workers’ paychecks and increase the cost of everyday household products, including raising the cost of utilities, all to pay for its socialist agenda.

BOTTOM LINE: Democrats are trying to hoodwink American taxpayers. Despite saying that they want to rebuild our crumbling roads and bridges, this bill has little to do with infrastructure, and once again prioritizes Democrats’ radical, socialist agenda. Biden’s infrastructure package is nothing more than a partisan power grab.