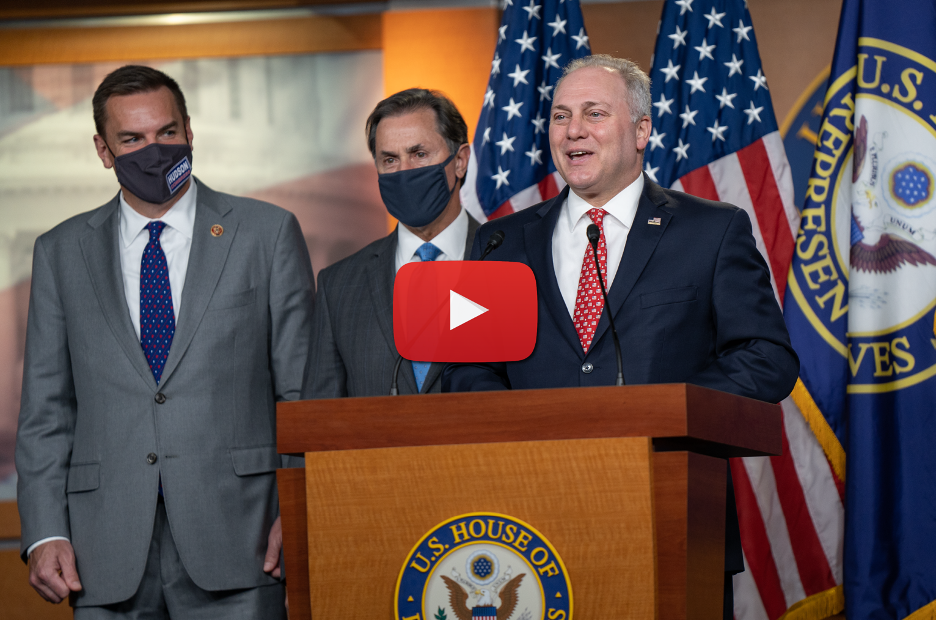 Click here or on the image above to view his remarks.
On uniting behind a conservative vision:

“Thank you, Kevin, and I also want to congratulate our leadership team. It truly is an honor to be going into this next Congress with such a great united team. Kevin as our Leader, Liz as our Conference Chair, we have Mike Johnson joining us as the Conference Vice Chair, of course Gary coming back as [Policy Chair] and for Richard coming in as well – welcome to you. Tom Emmer is also going to be joining our team again as the NRCC Chair. I think he’s probably out recruiting right now for the 2022 class that’s going to get us back in the majority. But, look, it’s been a battle the last two years to fight for the hard-working families of this country that felt left behind by Washington for so long, and we’ve delivered a lot of wins for them but there are still big issues left unresolved. I’d like to see us in these next few months get another relief package, in these next few days really, get another relief package for those hard working businesses that are literally hanging on by a vine. Those small businesses that we’ve been trying to help get another round of PPP forgivable loans so we can save millions more jobs, and Speaker Pelosi, for whatever reason, has chosen not to bring a bill to the Floor that has wide bipartisan support. Hopefully she reconsiders and does that.”

On fighting for the future of our country:

“But really over the next two years we know what this fight for the future direction of our country is going to be about. It’s truly a battle between freedom and socialism, and you saw voters across the country in all kinds of districts reject the socialist agenda that Speaker Pelosi pushed for these last two years. She’s going to have a tough decision to make. Does she continue catering to the most radical far-left elements of our conference? Or does she work with Republicans to get things done for hard working families? It’s going to be a choice she’ll have to make as Speaker, but we’re not going to stop fighting for those hard working families that make America work. That still are counting on us to work together for them. So, we’re going to continue battling for those hard working families and fighting for those free market ideas that have always made America the greatest country in the history of the world.”