WASHINGTON, D.C. — This week, House Republican Whip Steve Scalise (R-La.) led a delegation of 10 Republican lawmakers to the U.S.-Mexico border to witness the ongoing humanitarian and national security crisis as thousands of migrants continue to enter the United States illegally. 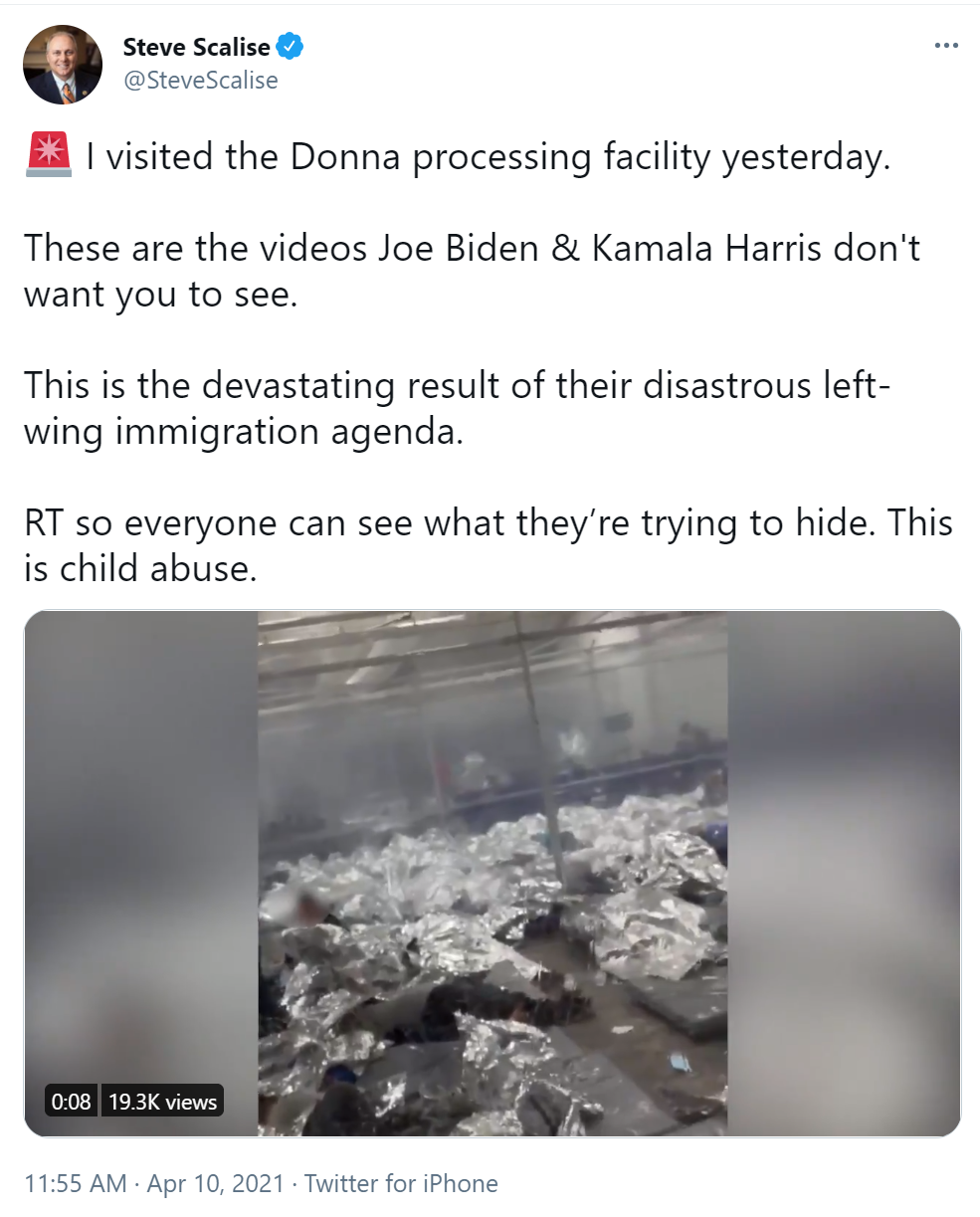 Click here or on the tweet above to see the video of the horrific conditions inside the Donna processing center.

Highlights from the trip: 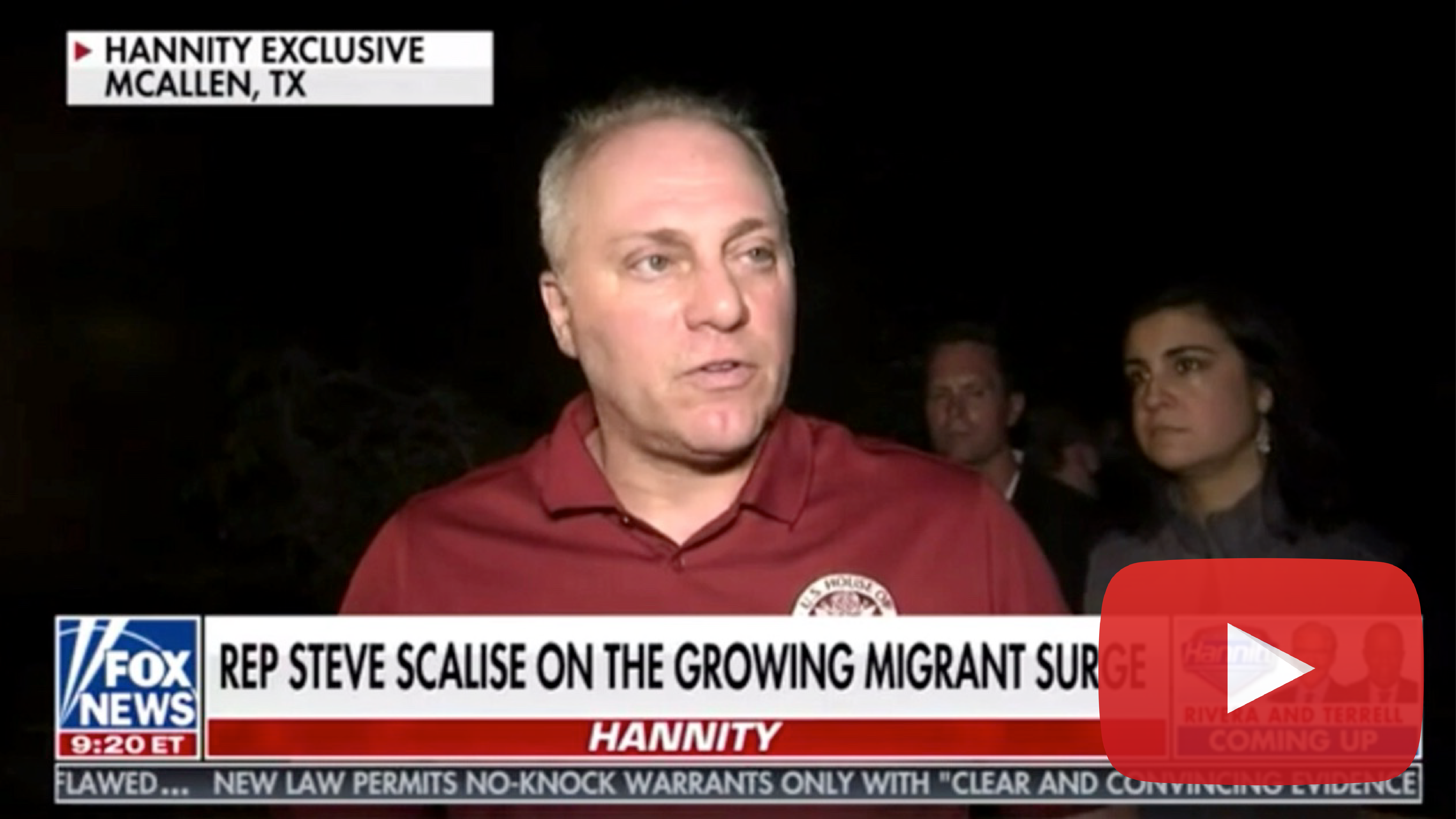 On the growing call for President Biden to reverse failed immigration policies:

“We’re demanding that the Biden administration reverse this failed policy. This is a crisis that was exclusively created by Joe Biden’s actions, and he can reverse it tomorrow. This isn’t some law that Congress passed. This is something Joe Biden did the day he became president. He was telegraphing it before he took the oath of office, but now you can see the result of it.” 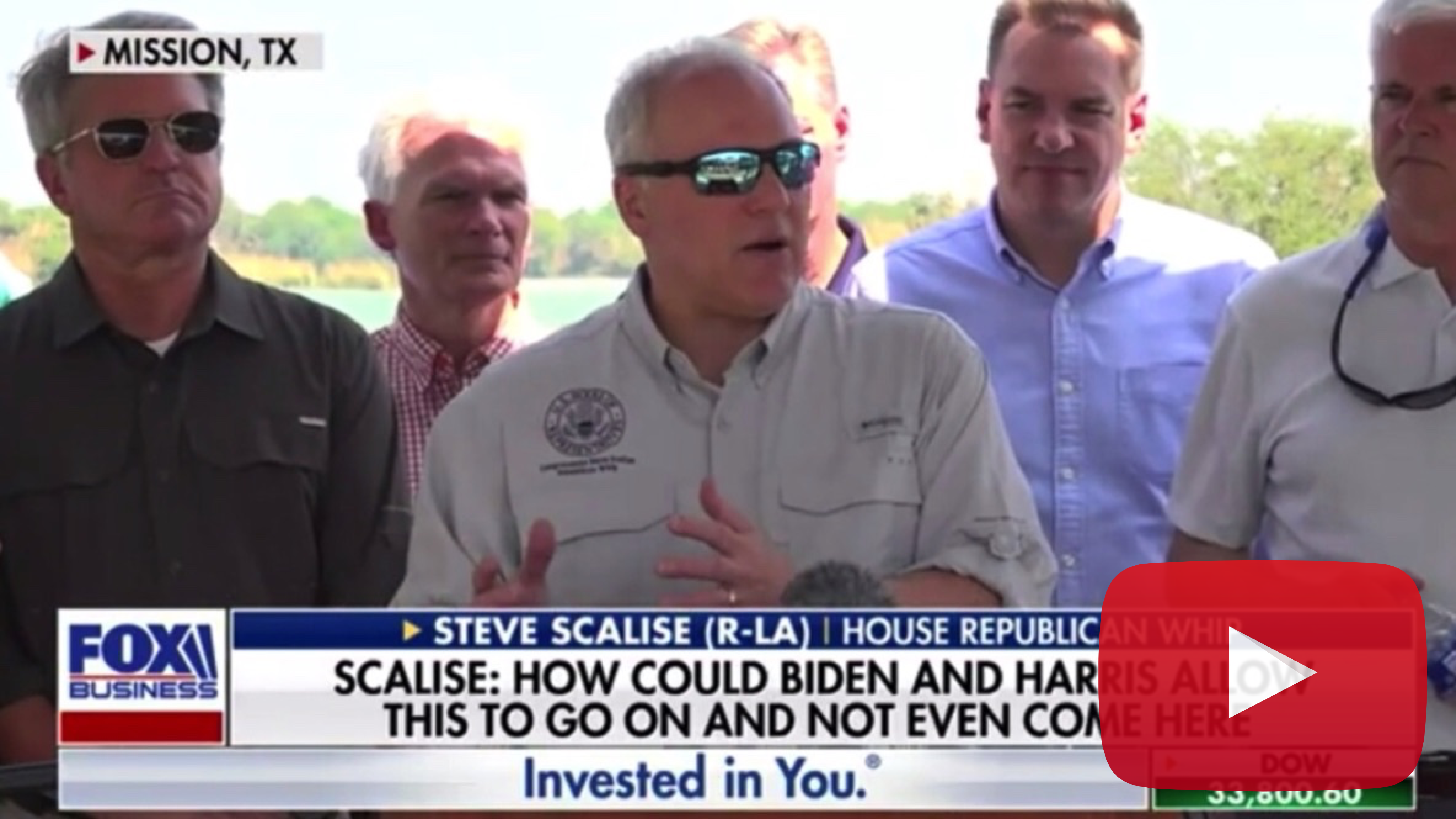 Click here or on the image above to watch the segment.
On overcrowded detention facilities: 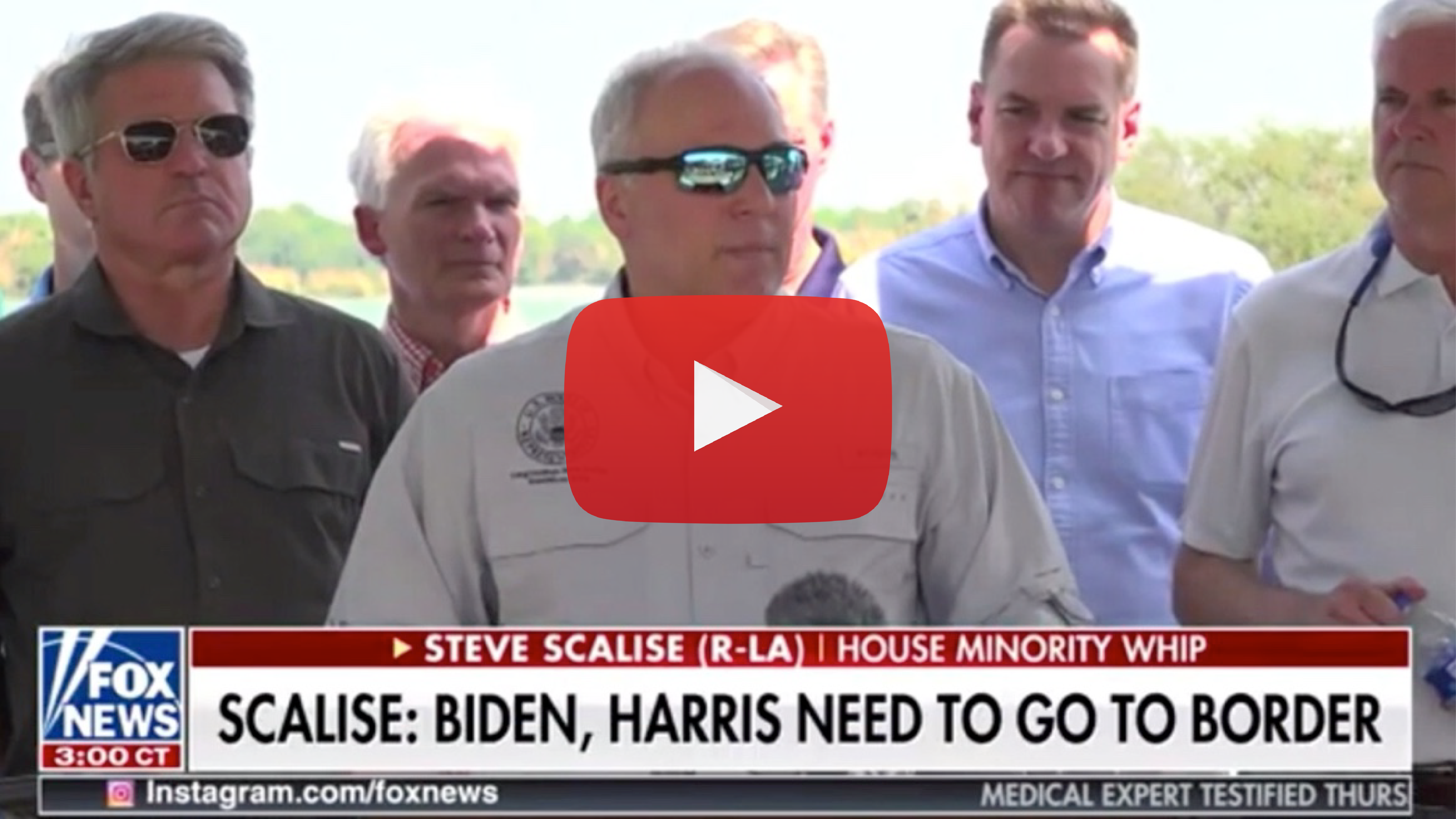 Click here or on the image above to watch the segment.
On the heartbreaking reality of young children trying to cross the southern border:

“One of the first people we encountered was a young girl, maybe no more than 10 years old, who was crying. And we asked her, ‘Why are you crying?’ And she said, ‘Because, I don’t want to be here.’ I’m a father. How could President Biden and Kamala Harris allow this to go on and not even come here and see it for themselves? It’s a disgrace.” 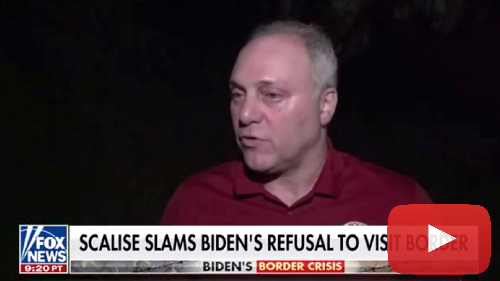 Click here or on the image above to watch the segment.
On the need for President Biden to reinstate President Trump’s ‘Remain in Mexico’ policy:

“You know, the single biggest thing that the President could do today is reverse the order that he did repealing the ‘Remain in Mexico’ policy. What President Trump did working with Mexico, getting Mexico to be a partner at controlling our southern border was working.” 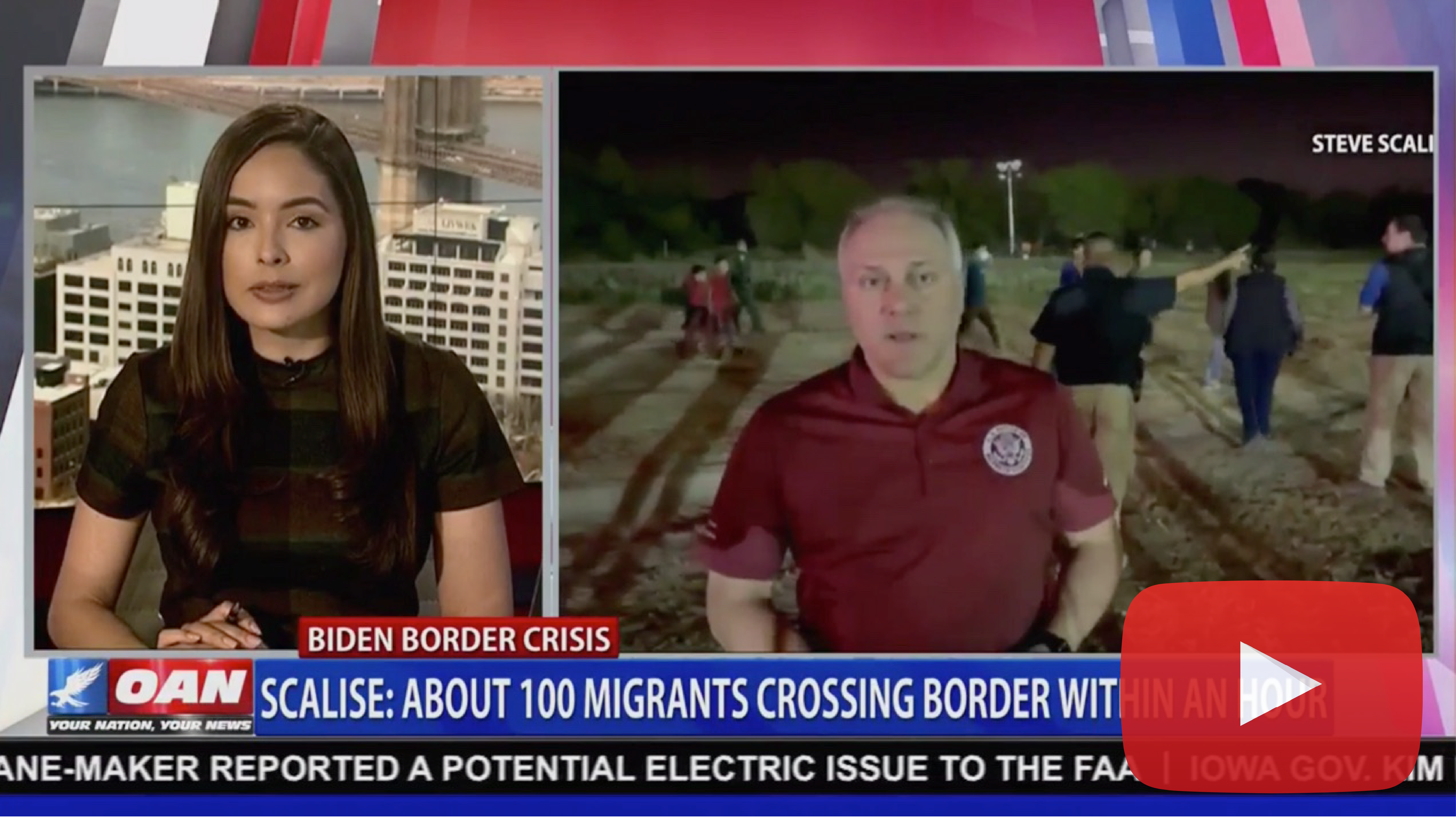 Click here or on the image above to watch the segment.
On the surge of migrants coming across the U.S.-Mexico border:

“Probably over 100 people right here just in the last hour that are waiting now to go off to a processing facility, and they’re coming into America because Joe Biden has created this magnet where he said the border’s open and look at what’s happening. This is out of control.” 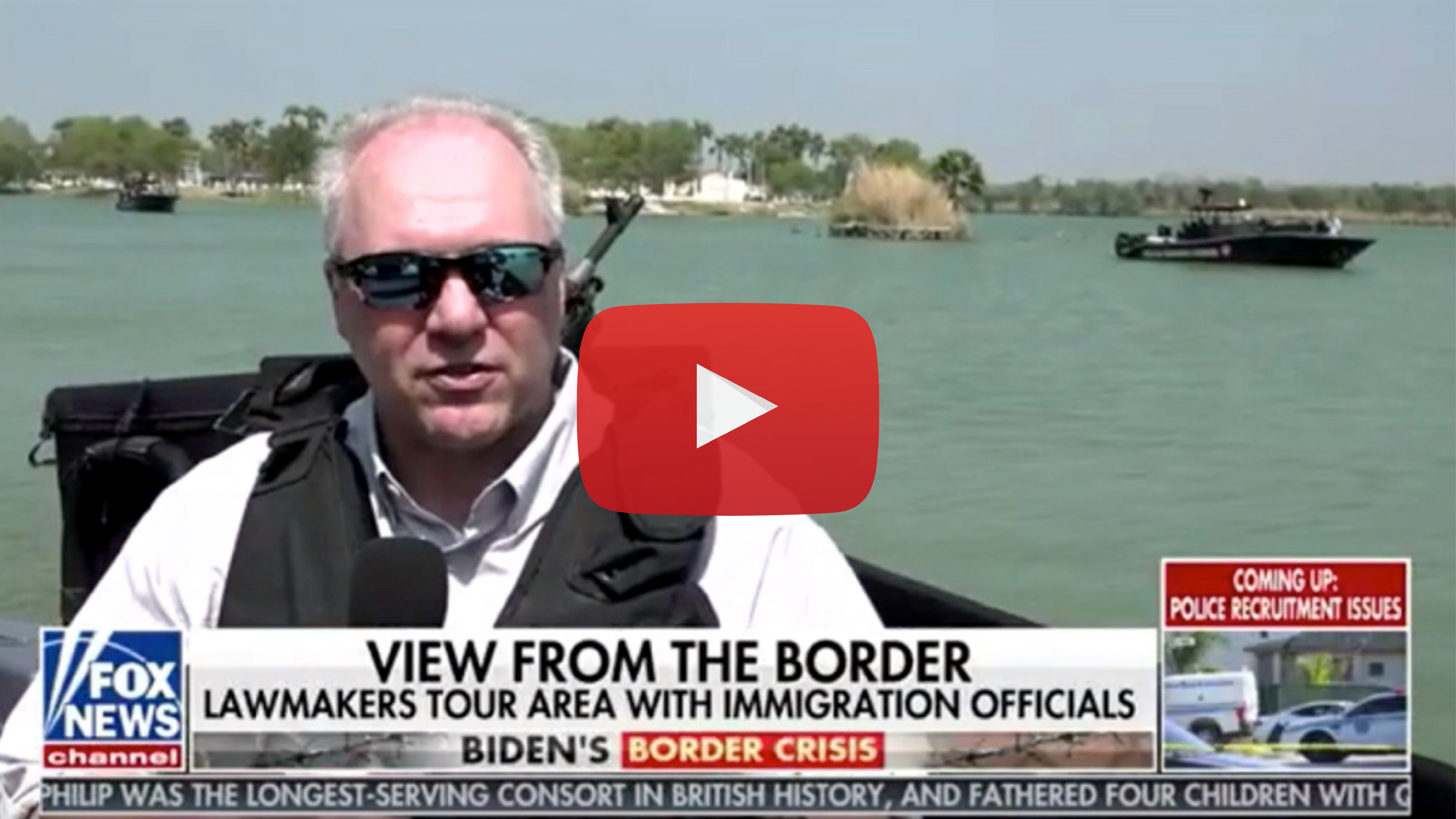 Click here or on the image above to watch the segment.
On the horrors many young women face on the treacherous journey to the U.S.-Mexico border:

“Many of these young girls that are coming across are being sexually assaulted and raped.” 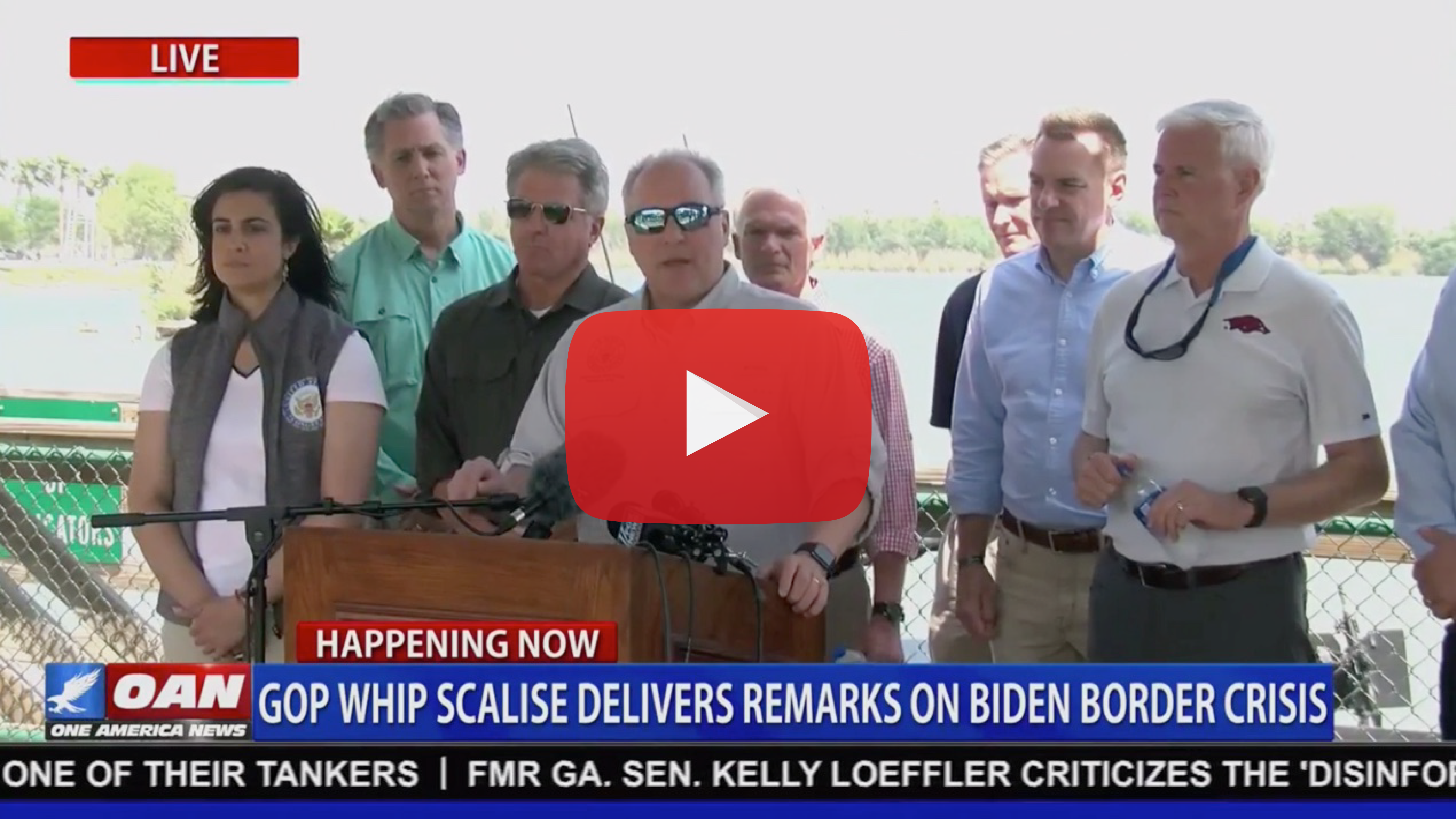 Click here or on the image above to watch the segment.
On President Biden’s failure to secure the southern border:

“These kids are pawns in his dangerous game. It’s got to stop. It was created when President Biden got rid of things like the ‘Remain in Mexico’ policy. He could put that back in place tomorrow and stop this surge of illegals coming over. Stop this boondoggle he’s giving to the drug cartels to not only make millions of dollars off the human trafficking, but they know what the loopholes do to our border patrol agents. Forty percent of America’s Border Patrol agents at these high-trafficked areas are not stopping the drugs from coming in, which is their mission and what they want to do. They have to be over at these holding facilities babysitting the children that have come over, and the drug dealers know it which means there are porous areas of our border opened up for the drugs to come across. And the drug dealers know while the Border Patrol agents are taking care of the kids that are coming across illegally, they have free reign to bring in drugs illegally.

“President Biden, you know this is going on. You can stop it right now. We are calling on you to come down here, see this for yourself, and then reverse the failed policies you’ve put in place that created this crisis at America’s southern border.” 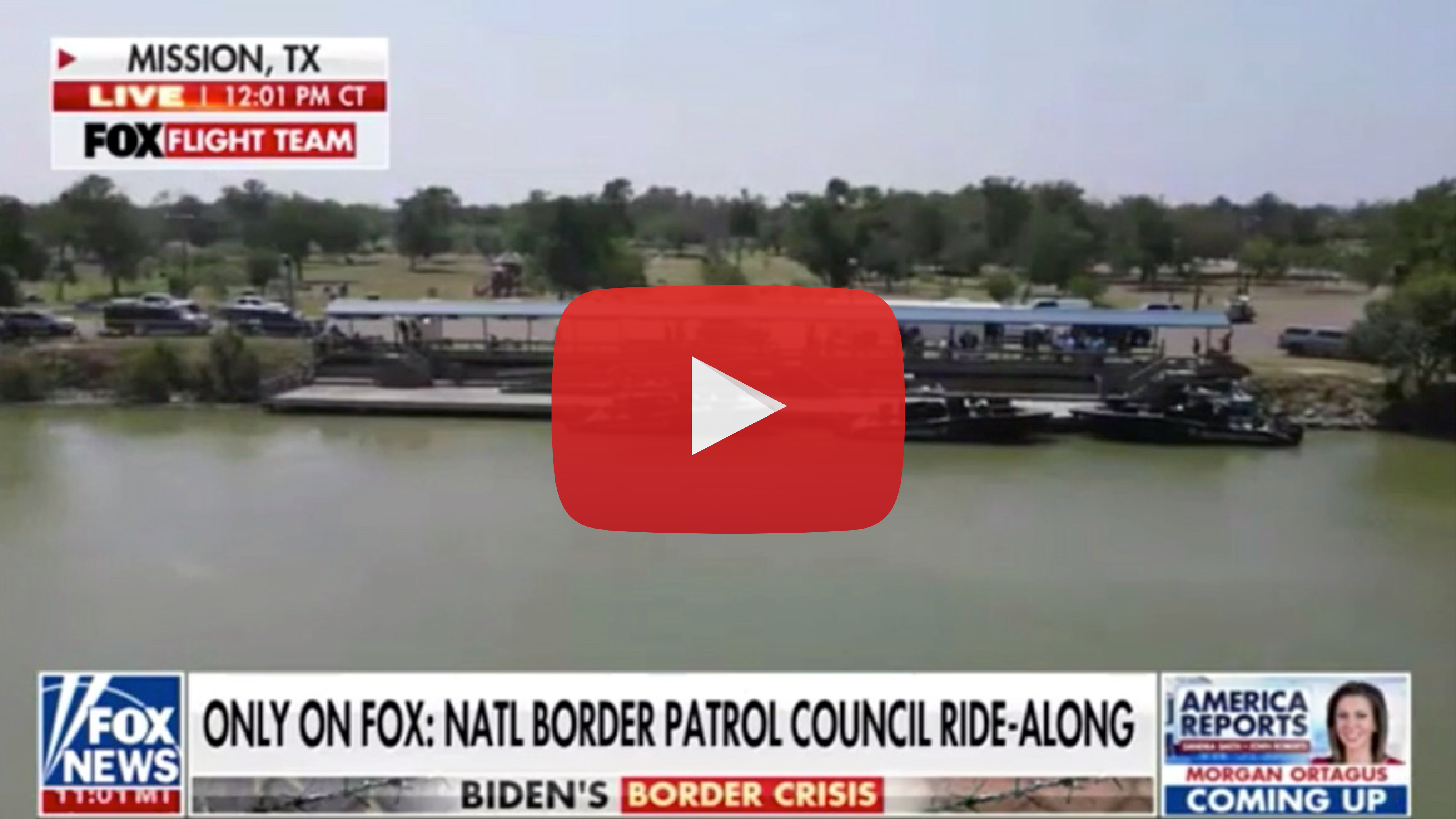 Click here or on the image above to watch the segment.
On the seriousness of the border crisis:

“This is happening every single day. If you’re not heartbroken by that, you don’t realize the devastating impact that this is having on people.” 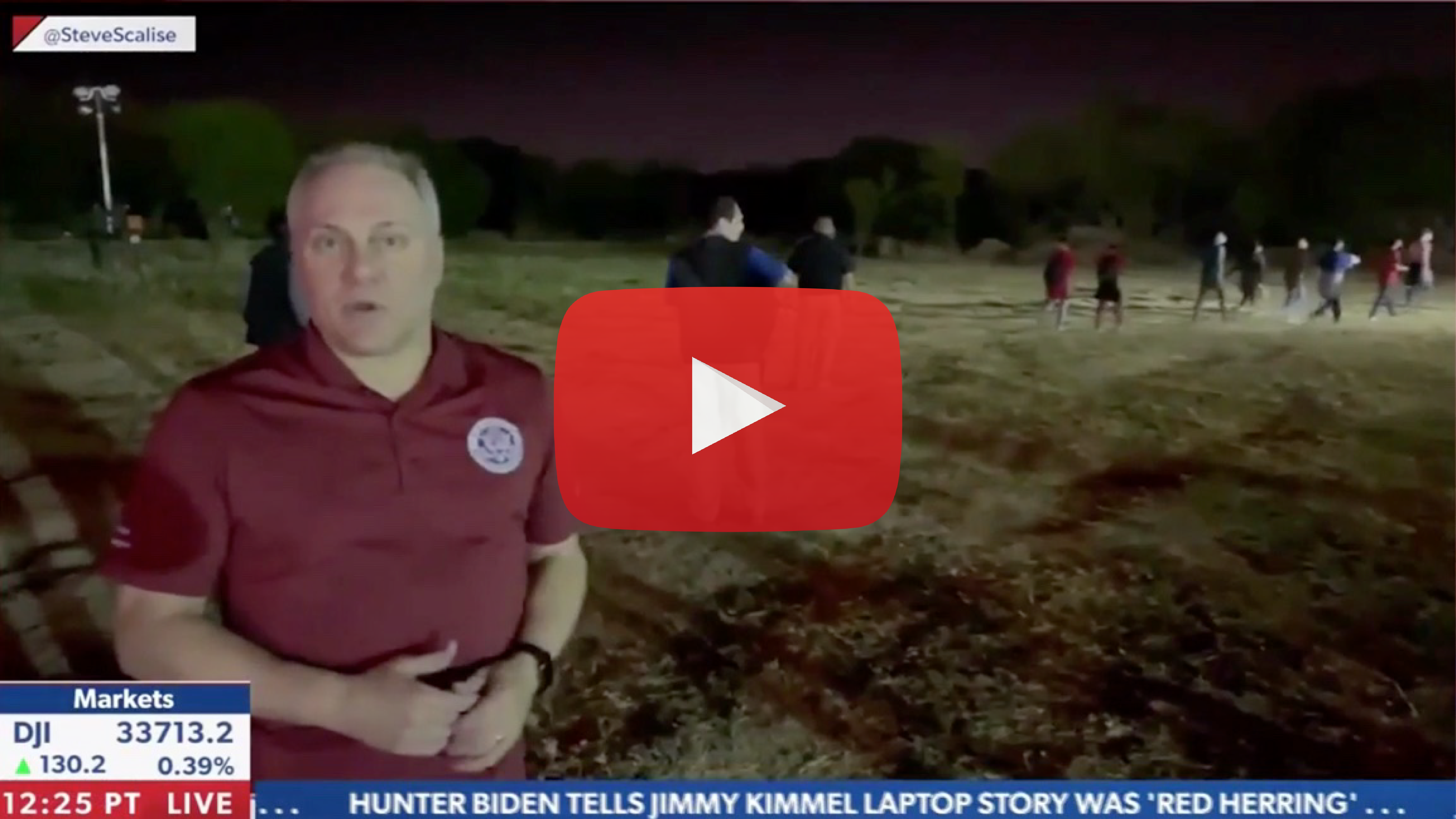 Click here or on the image above to watch the segment.
On seeing children illegally cross into the country overnight:

“As we’re here at the McAllen facility you just saw a large number of kids just come running across the border, and here they are right here — just came into the country illegally, ran across, just got apprehended by Border Patrol agents.” 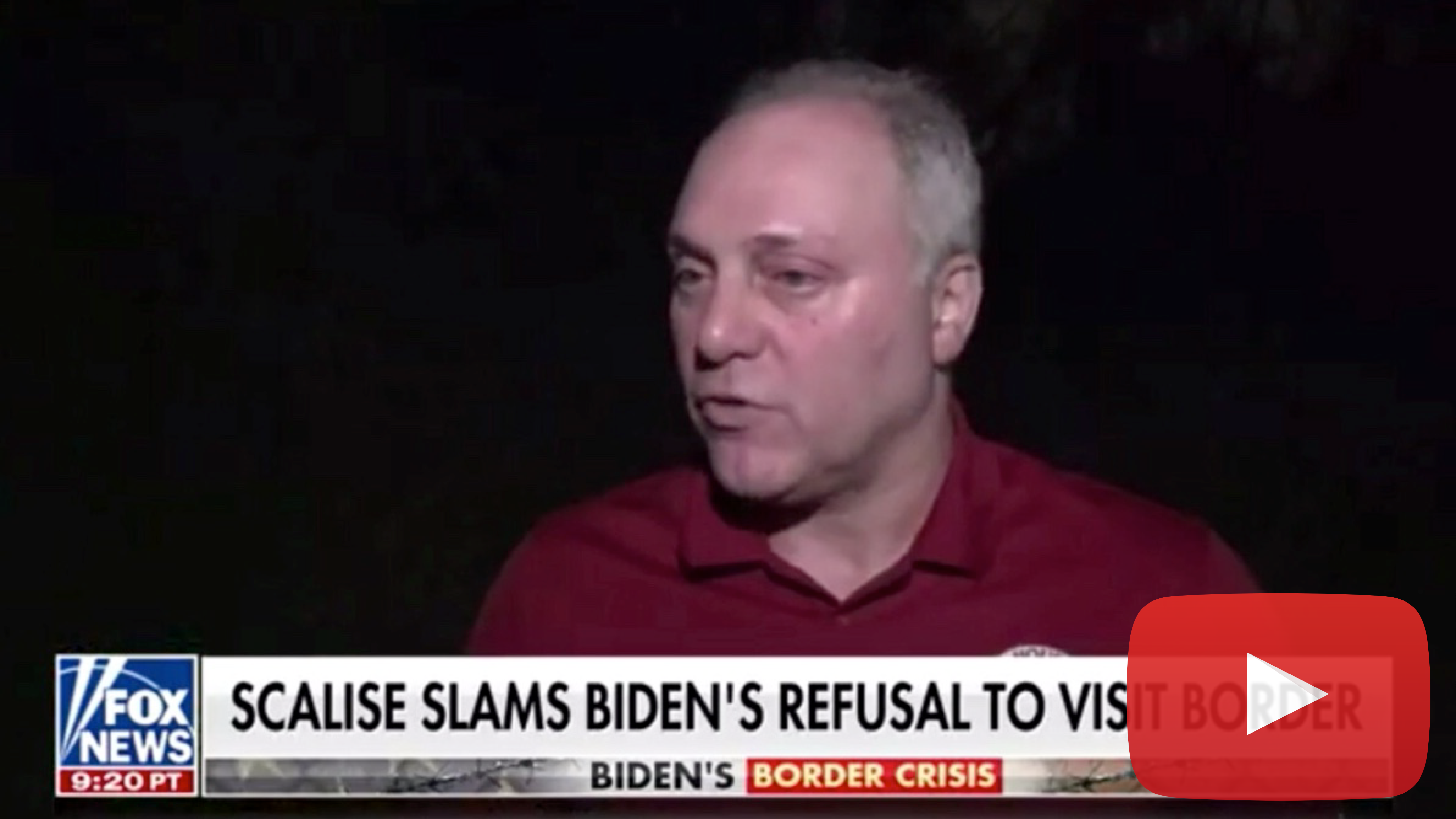 Click here or on the image above to watch the segment.
On President Biden’s refusal to visit the crisis at the border:

“He could reverse this tomorrow, and he won’t come down and see it firsthand because he knows what’s going on. He said he’d put Kamala Harris in charge — she won’t even come down.” 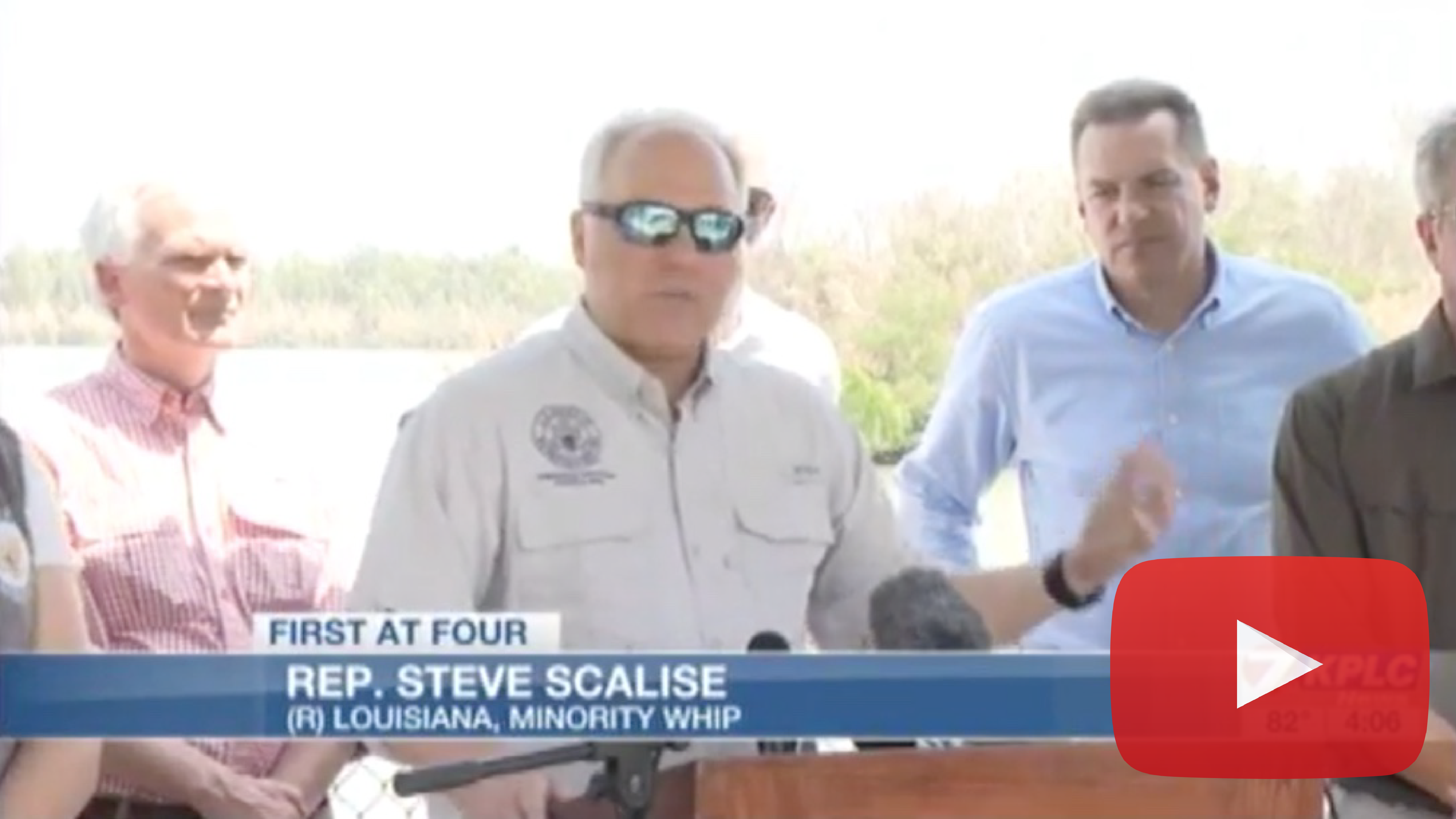 Click here or on the image above to watch the segment.
On the Biden administration’s decision to halt border wall construction:

“But, before you go borrowing money from our kids and grandkids to do trillions in infrastructure, they’re already spending money that’s been appropriated to build this wall, and they’re spending that money to not build the wall.” 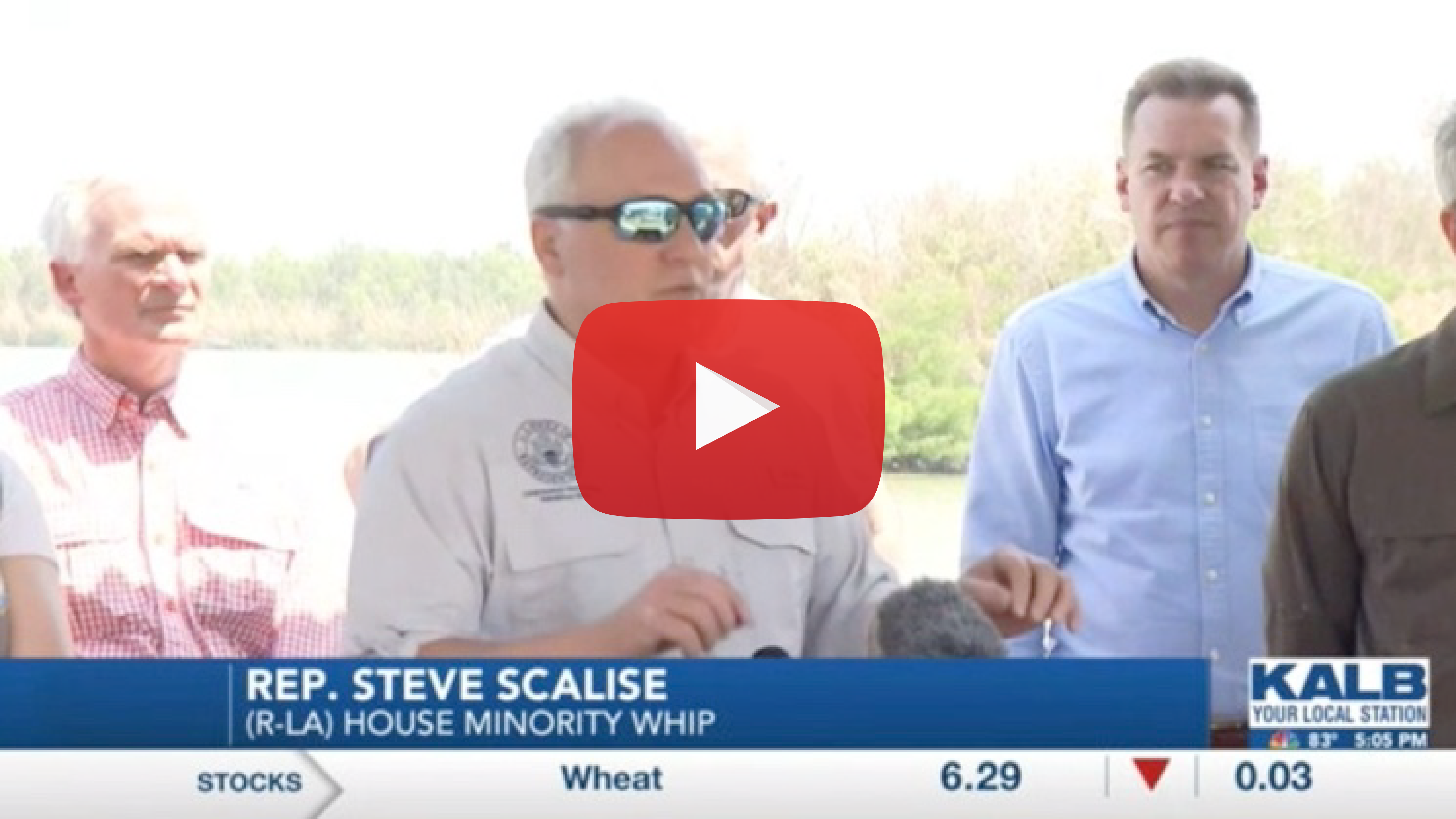 Click here or on the image above to watch the segment.
On the Biden administration and Speaker Pelosi’s unwillingness to address border problem:

“We call on the President and Vice President to do their job. They can reverse this policy tomorrow. We’ll continue to raise national awareness. We’ll try to push legislation. Good luck trying to get Pelosi to address this scandal because Speaker Pelosi doesn’t want to address this problem either.”

House Minority Whip Steve Scalise said he has been “alarmed” by what he’s seen in recent days after leading a delegation of fellow GOP members of Congress to the southern border, where there has been a record surge of migrant children entering the country.

“It’s a humanitarian crisis,” Scalise, a Louisiana Republican, told Newsweek Friday, shortly after visiting an immigration processing facility at the border in Texas.

Scalise said he was shocked by what he’s seen: young children crossing in groups of sometimes five to a single boat, kids cramped like “sardines” in holding facilities, “overwhelmed” Border Patrol agents.

“We just saw a large number of kids just come running across the border. They just came into the country illegally, just ran across, and they’ve been apprehended by Border Patrol Agents. It’s going on all around us. We’ve been here less than an hour,” said Scalise.

During a Friday appearance on Fox Business Network’s “Mornings with Maria,” Rep. Steve Scalise (R-LA) urged President Joe Biden to reverse his immigration policy to solve the ongoing crisis at the border.

Scalise, who is visiting the border with a delegation of 10 members, described the situation at the border as “inhumane.” He asserted that Biden “created” this “scandal” because he put an end to former President Donald Trump’s Remain in Mexico policy.

House Minority Whip Steve Scalise (R-LA) posted a video to his Twitter account to detail what he has seen at the U.S.-Mexico border in the Rio Grande Valley Sector amid the continued surge in illegal foot traffic.

“[They] came into the country illegally, ran across, just got apprehended by Border Patrol agents, and it’s going around all us. We’ve only been here for less than an hour, and we’ve already seen multiple people coming across…Probably over 100 people in the last hour,” Scalise said.

“And they’re coming into America because Joe Biden has created this magnet where he said, ‘The border’s open’ and look at what’s happening,” he added.

House Republican Whip Steve Scalise continued his criticism of President Joe Biden’s immigration policies during his most recent trip to the U.S.-Mexico border.

“This is out of control. It’s the middle of the night. We’ve seen dozens of children flow freely across the border in just the past few minutes,” Scalise tweeted early Friday morning. “This is the reality of Joe Biden’s disastrous amnesty agenda.”

The record numbers of migrants coming across the nation’s border were “totally preventable,” and the blame lies with President Joe Biden, House Minority Whip Steve Scalise, who led a delegation of Congress members to the border this week, said Friday.

“These are inhumane conditions (that) President Biden created,” the Louisiana Republican said on Fox Business’ “Mornings With Maria.” “Vice President Kamala Harris was put in charge but won’t even come down and see this. It’s so bad, she doesn’t want to be associated with it yet she’s the person in charge of it on behalf of the Biden-Harris administration. It’s inexcusable.”

Scalise said he and his colleagues spent a number of hours with Border Patrol agents last night, including going to a processing facility around midnight near the Rio Grande River, where they saw “dozens of people” coming across the border in less than an hour.

Harlingen, Texas (KVEO)—House Republican Whip Steve Scalise led a Congressional delegation to the border as Republicans continue to pressure the Biden administration for what they say is a crisis fueled by the administration’s own immigration policies.

Another wave of pressure for President Biden to address the overflow of unaccompanied minors came this afternoon from a delegation led by Whip Scalise.