WASHINGTON, D.C.—House Republican Whip Steve Scalise (R-La.) joined Leader McCarthy, Conference Chair Cheney, and Congressman Andy Biggs (R-Az) at today’s leadership press stakeout to discuss their plan to bring a resolution to the Floor to censure Adam Schiff for his numerous lies and abhorrent behavior throughout his sham impeachment process. Whip Scalise emphasized Congress’ Constitutional responsibility to be fair and transparent – but instead, Democrats continue to hide the facts and mislead the American people on this impeachment witch hunt while neglecting their responsibility to improve the lives of American families by passing legislation to lower drug prices and passing the USMCA. 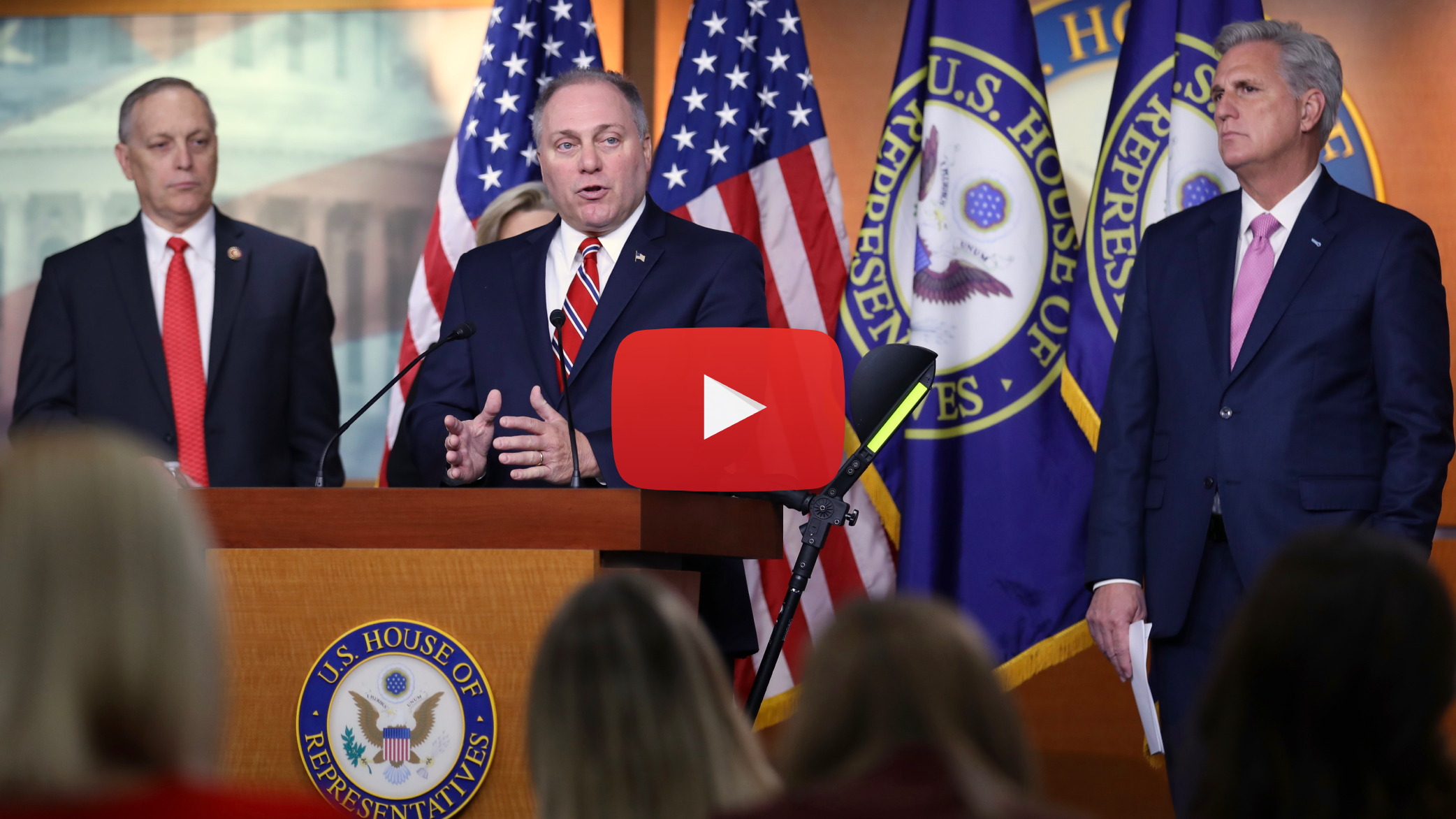 “I want to thank my colleague, Andy Biggs, for bringing this censure resolution that I’m proud to co-sponsor. Over the last few weeks, when Congress was not in session, what we saw from Speaker Pelosi and Chairman Schiff should raise alarming questions to people all across this country. Why are they trying to impeach a President of the United States behind closed doors, in secret, where the public can’t see it, the press can’t see it? Even now Members of Congress that aren’t on the committees of jurisdiction, can’t even go read the testimony. What is Chairman Schiff trying to hide from the American people?

“We have an election next year. In fact, we had an election in 2016, and I understand that there were some people that didn’t support Donald Trump, but he won. He was duly elected by the American people. Some of them still haven’t gotten over it and are trying to reverse the decision that was made by the people of this country. Again, we have an election for President next year. Speaker Pelosi and Adam Schiff should not try to take away the rights of the American people to have that voice next year by going behind closed doors and trying to impeach a President of the United States without even listing high crimes and misdemeanors, which is the standard that the Constitution set when they established the power of impeachment, which was given to Congress. It was given with very specific limitations, and requirements, and responsibilities. And one of those is fairness. One of those should be transparency. This should be done in public view. Why the Volker testimony is not going to be released to the public when it’s being dripped, drabbed, leaked, little pieces, selectively leaked that ultimately end up being shown to be untrue, misleading.

“Case in point, Adam Schiff’s opening statement when he didn’t read the transcript from the whistleblower. He read his own version. A false version. It shows how unserious they are about this process that ought to be serious, but it also shows that they continue to try to mislead the American people and hide from the American people what the real facts are. This should be fact-based. It should be based on what actually did happen. And the entire press, the public should be able to see it. Members of Congress should be able to see it. And Adam Schiff and Speaker Pelosi are denying that opportunity. In fact, when I asked on the House Floor last night – a parliamentary inquiry – to ask ‘if we are currently, the House, in an impeachment inquiry?’ Not only did [Democrats] not answer the question, they shut the microphone off. Again, these kind of Soviet-style tactics shouldn’t be allowed. And frankly, a lot of people across the country are alarmed and disturbed that this is the route that Speaker Pelosi and Adam Schiff are going to go. They ought to be accountable. They ought to be transparent.

“By the way, there are a lot of other things that the House could be and should be doing to solve real problems for families. We have passed a bill out of the Energy and Commerce Committee unanimously to lower drug prices. Every Republican and every Democrat on the committee of jurisdiction voted unanimously for a package of bills that would lower drug prices. Those bills could be signed into law by the President and families across America could be paying lower prices for drugs, but Speaker Pelosi refused to bring that package of bills to the [House Floor]. USMCA, a better trade deal with our friends from the north and south – Canada and Mexico – could be signed into law today and Americans could be benefitting from those jobs. Over 160,000 new jobs that our country could already have. States like Wisconsin, and Pennsylvania, and Minnesota, and Michigan could be selling their dairy products into Canada right now. But Speaker Pelosi won’t bring that bill to the [House Floor] because she’s so focused on this impeachment witch hunt. It’s got to end. They ought to be transparent with the American people. But until then, we’re going to continue to raise these serious questions and push for accountability and transparency.”