WASHINGTON, D.C. — House Republican Whip Steve Scalise (R-La.), House Committee on Oversight and Reform Ranking Member James Comer (R-Ky.), and Republican lawmakers held a hearing on Tuesday to investigate claims that the coronavirus originated in a Chinese lab and hold the Chinese Communist Party accountable for the deaths of millions of people across the globe.

Republican lawmakers on the Select Subcommittee on the Coronavirus Crisis heard from Members of Congress who have been investigating the virus’ origins as well as expert witnesses about the mounting evidence showing the virus originated from the Wuhan Institute of Virology (WIV). The panelists agreed that the evidence indicates that the coronavirus having emerged from the Wuhan lab. 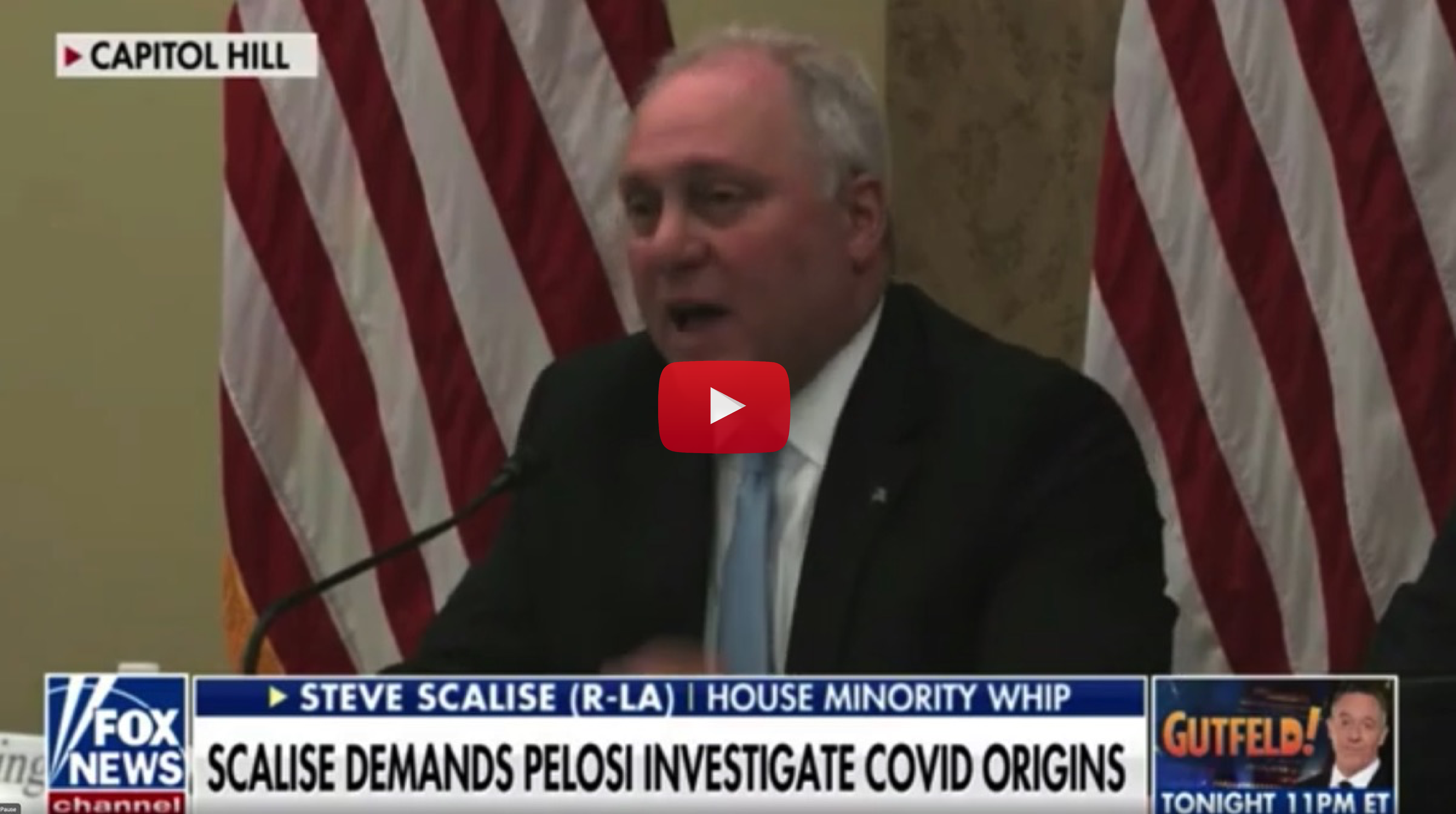 “Speaker Pelosi has refused to allow a single hearing, calling it a ‘diversion.’ We should be having a bipartisan investigation. Speaker Pelosi should immediately take up the bill that passed unanimously out of the Senate that would declassify all intelligence related to the origins of COVID. Think about this: there is a bill that passed the Senate unanimously – all Republicans, all Democrats. Speaker Pelosi has yet to bring that up. We’re calling on her to bring that up.” 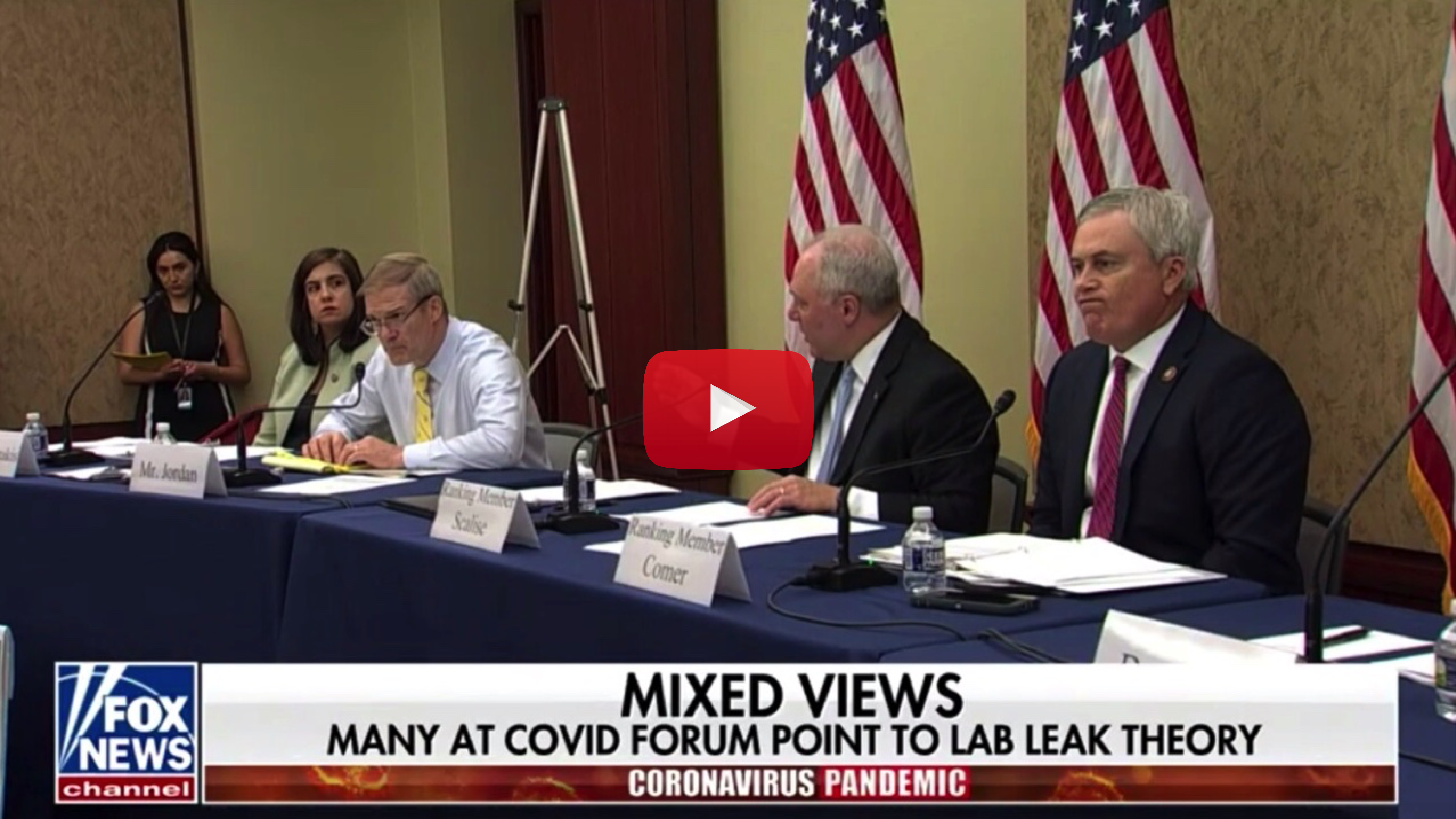 “Amid the Biden Administration’s own intelligence review, House Republicans held a forum this afternoon with scientists and former Trump Administration officials. The witnesses and questioners here largely agreed the pandemic began at the Wuhan Institute of Virology.” 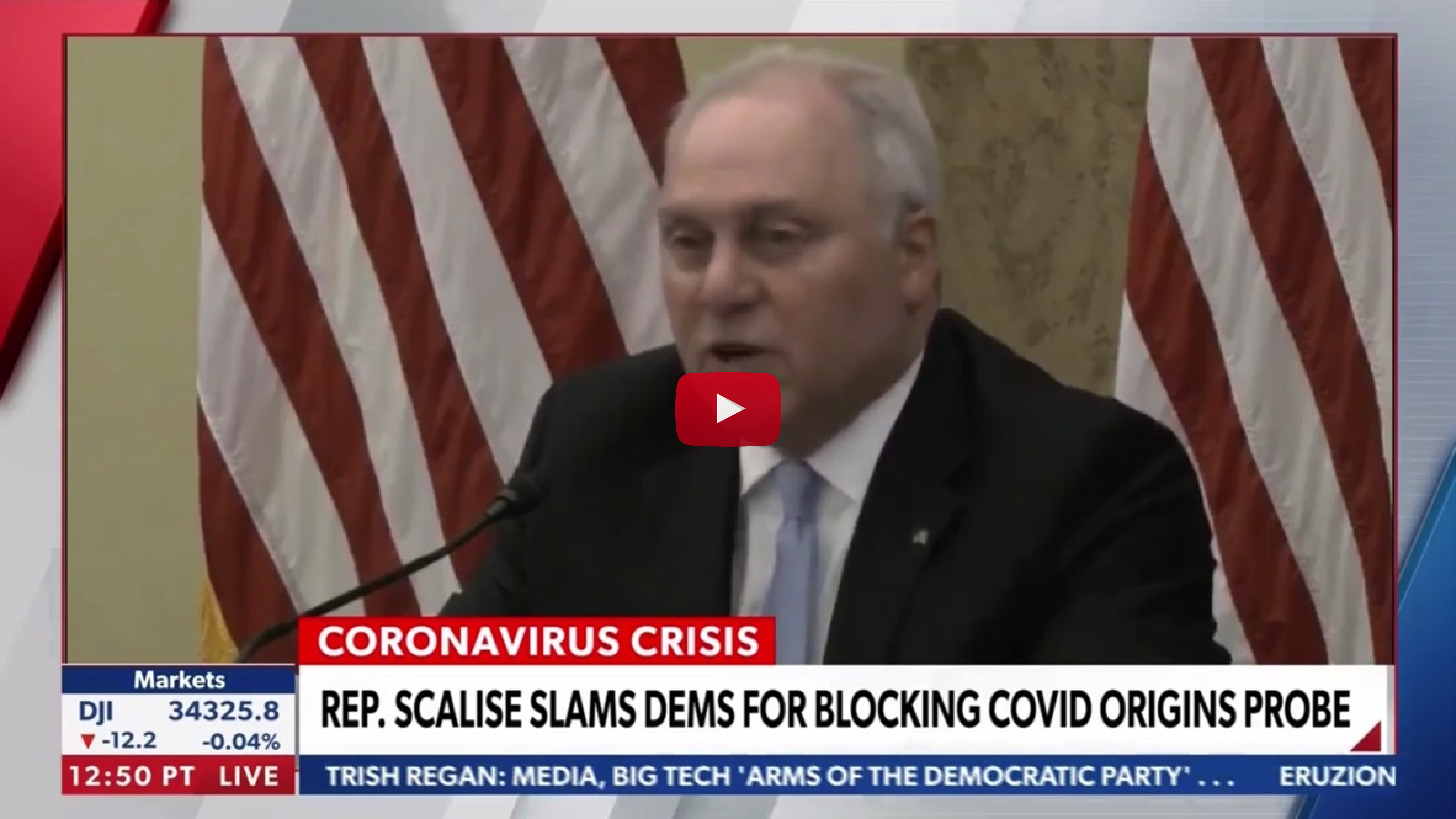 “600,000 Americans are dead and 4,000,000 people worldwide. This is exponentially worse than Chernobyl, and yet to this day, Speaker Pelosi has yet to have a single hearing on the origin of COVID-19. But we should be having a bipartisan investigation that would include subpoena power to bring others in. NIH and Dr. Fauci should also testify about the history of NIH’s involvement in gain-of-function [research].” 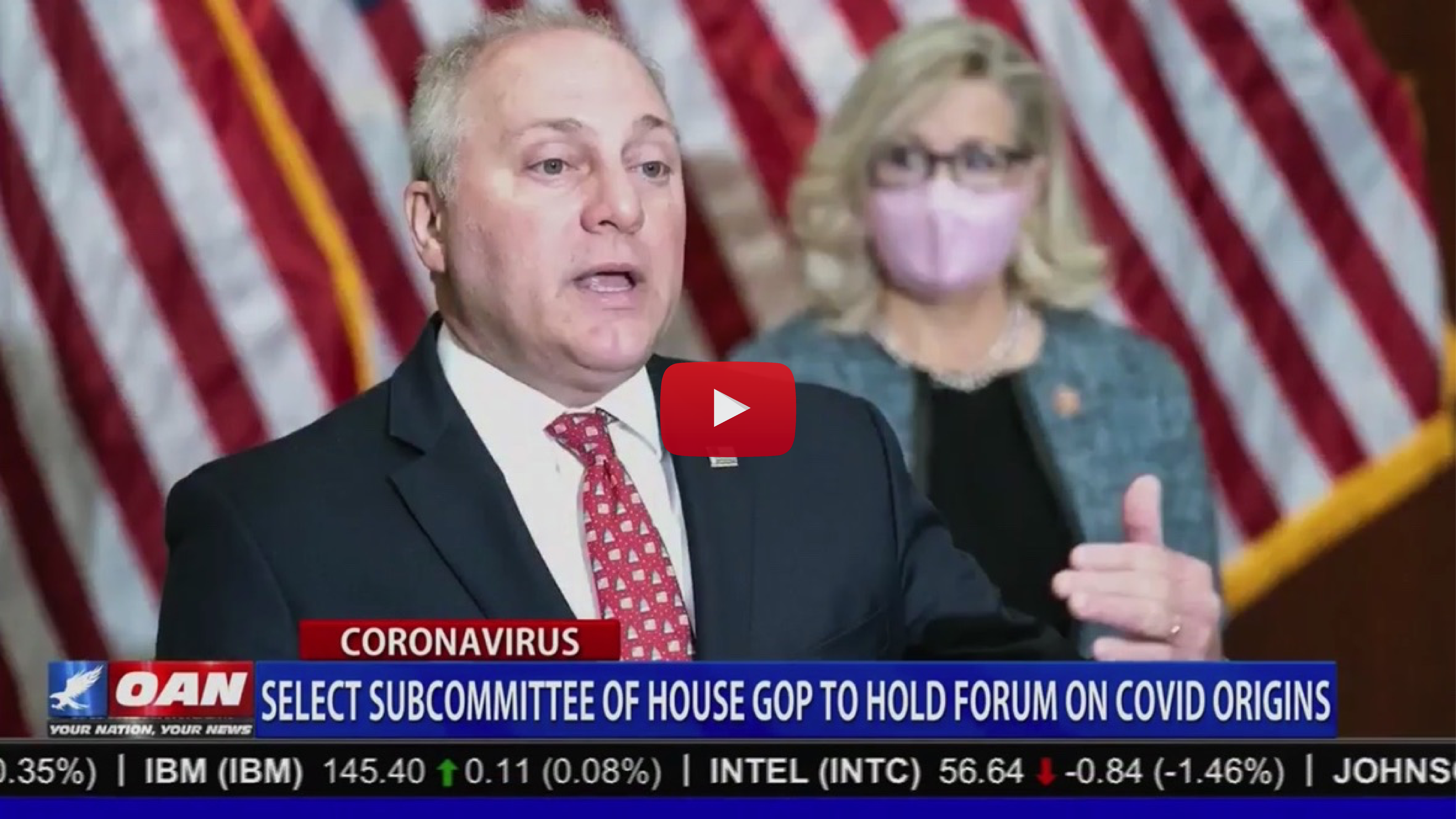 “A select subcommittee of House Republicans holds a hearing on the origins of COVID-19. The group met today and was led by Minority Whip Steve Scalise and House Committee on Oversight and Reform Ranking Member James Comer. The lawmakers spoke with experts and witnesses to better understand how the pandemic started. This comes as Democrats reportedly refuse to hold a hearing, even after several calls from Republicans to take action and hold China accountable.” 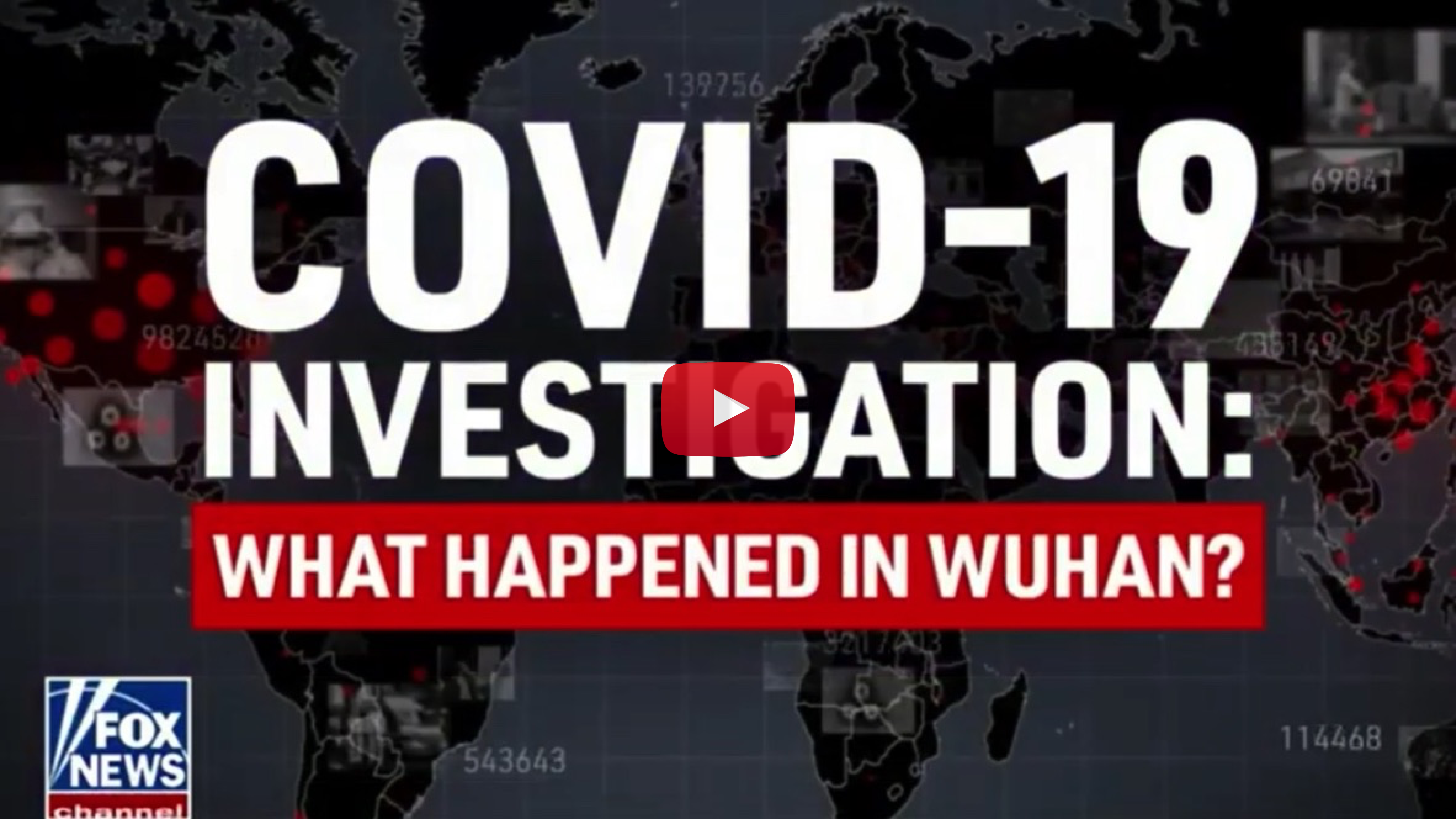 “House Minority Whip Steve Scalise said [the COVID-19 origins hearing] will feature doctors, scientists, and members of Congress who have been investigating on their own. This comes as reports surface that Dr. Anthony Fauci initially resisted a Trump-era order to cancel a research grant linked to the Wuhan lab.”

“Republican Whip and Select Subcommittee on the Coronavirus Crisis Ranking Member Steve Scalise is reacting to Dr. Anthony Fauci’s refusal to show up to a congressional forum Tuesday afternoon to discuss the origins of Wuhan coronavirus.

“‘It’s disappointing that Dr. Fauci chose not to testify at our forum on the origins of COVID-19. Dr. Fauci’s recently released emails reveal the very alarming concerns raised by medical experts about a lab leak in February 2020, and that the virus appeared to be engineered. Dr. Fauci needs to testify so we can find out what he knows about the COVID origins investigation, and we hope he will come before Congress soon to provide the American people with much needed answers,’ Scalise tells Townhall.”

“House Republicans pressed forward with their quest to investigate the origins of the COVID-19 pandemic by hosting their own hearing Tuesday — without Democrats or the ability to subpoena Dr. Anthony Fauci.

“The fact-finding event, which took place in the Capitol Visitors Center as opposed to a traditional hearing room, was led by House Minority Whip Steve Scalise (R-La.), who also serves as ranking member of the Select Subcommittee on the Coronavirus Crisis.

“‘We have asked that question for more than a year and requested that the House majority hold hearings to investigate the origins of COVID. Perplexingly, Speaker [Nancy] Pelosi [(D-Calif.)] has refused to allow a single hearing — calling it a “diversion,” Scalise said in his opening statement. ‘As the American people will hear today from our expert witnesses, this is far from a diversion.’”

“House Republicans took aim at China’s Wuhan Institute of Virology Tuesday in a hearing Tuesday to investigate the origins of COVID-19.

“‘The evidence continues to mount that this was a man-made disaster that started in the Wuhan lab,’ said House Minority Whip Steve Scalise, Louisiana Republican, in his opening remarks. ‘If that is the case, then it might be considered dramatically worse than Chernobyl.’”

“Scalise described the lack of action by Pelosi to even participate in a hearing to get to the bottom of the virus’ origins as ‘perplexing.’ He said Pelosi ‘keeps trying to cover up for China’ by not investigating the origins.”

“GOP lawmakers on Tuesday held their own hearing on the origins of COVID-19 and demanded House Speaker Nancy Pelosi convene a bipartisan one, also urging the House to pass a bill to declassify all intelligence related to the virus.

“‘Perplexingly, Speaker Pelosi has refused to allow a single hearing – calling it a “diversion.” As the American people will hear today from our expert witnesses, this is far from a diversion,’ Scalise said in his opening remarks.”

“House Minority Whip Steve Scalise, R-La., told ‘Mornings with Maria’ Tuesday that House Republicans are hosting their own investigation into the origin of the coronavirus on the heels of the Democratic Party’s refusal to hold a hearing.

“REP. STEVE SCALISE: ‘We’ve been calling for over a year now, House Republicans, for a hearing on the origin of COVID. This is like a virus that has taken over 600,000 American lives, millions worldwide, and for whatever reason, it’s perplexing that Speaker Pelosi refuses to have a hearing in any of the committees of jurisdiction on how this started.’” 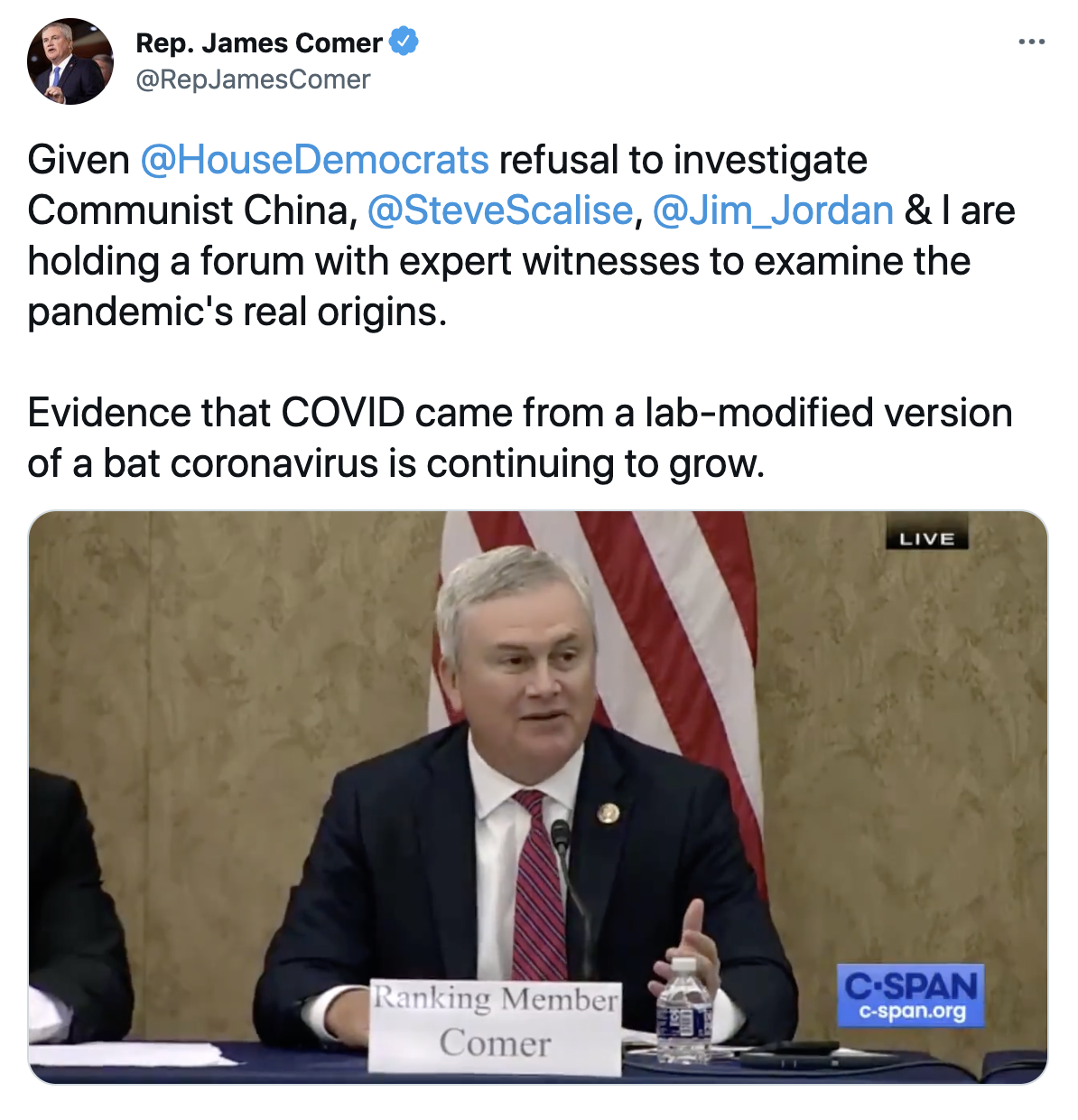 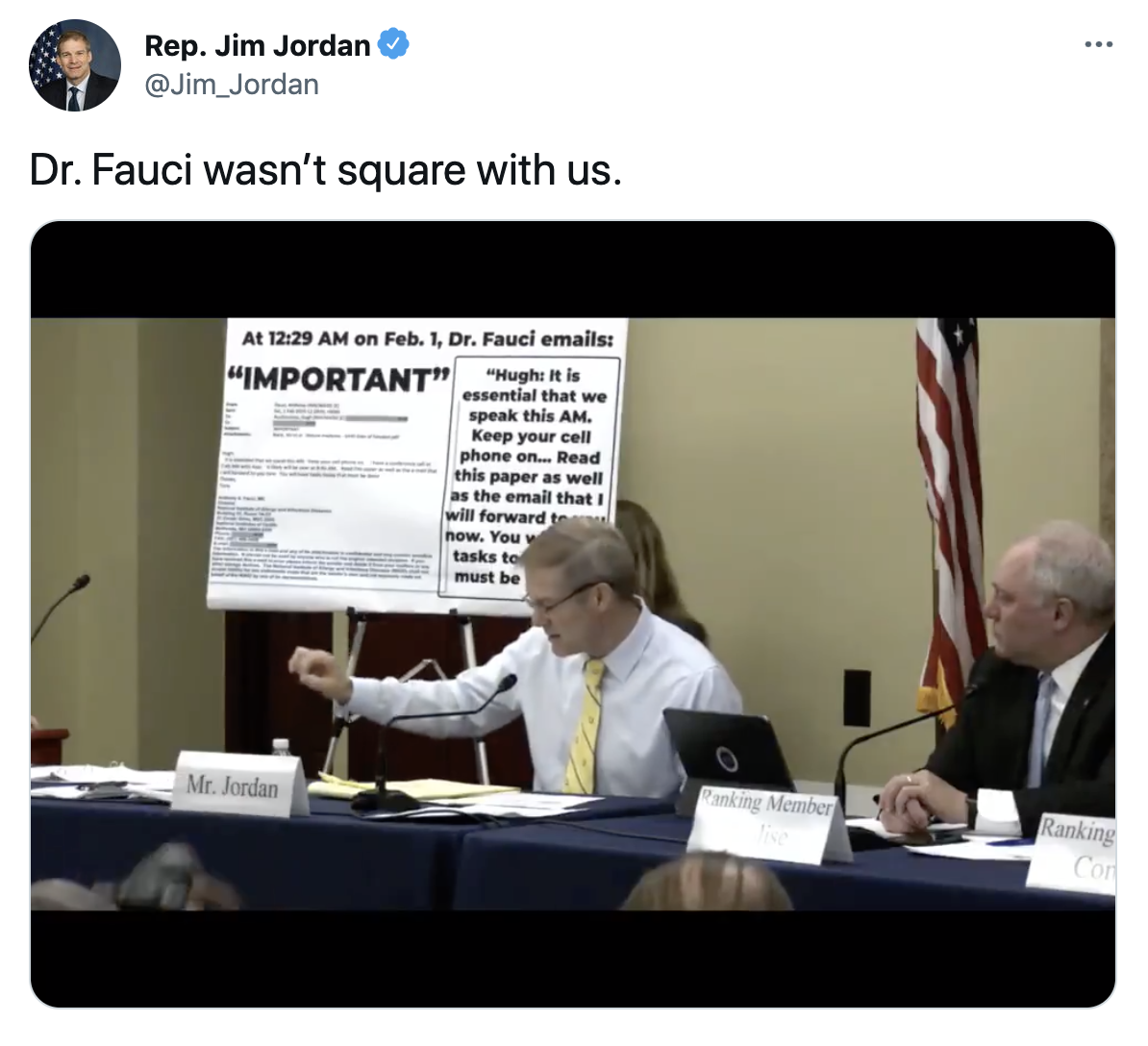 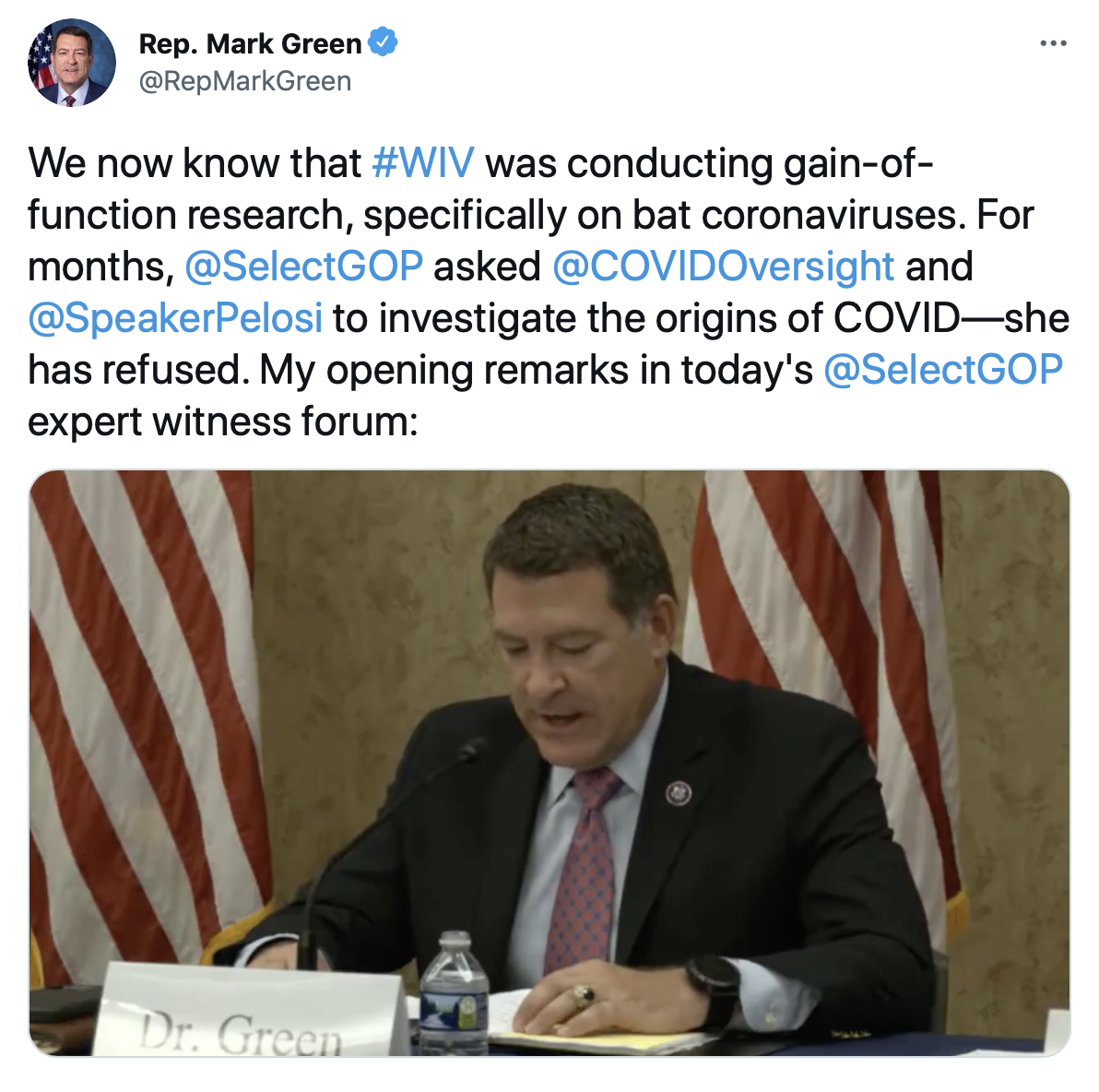 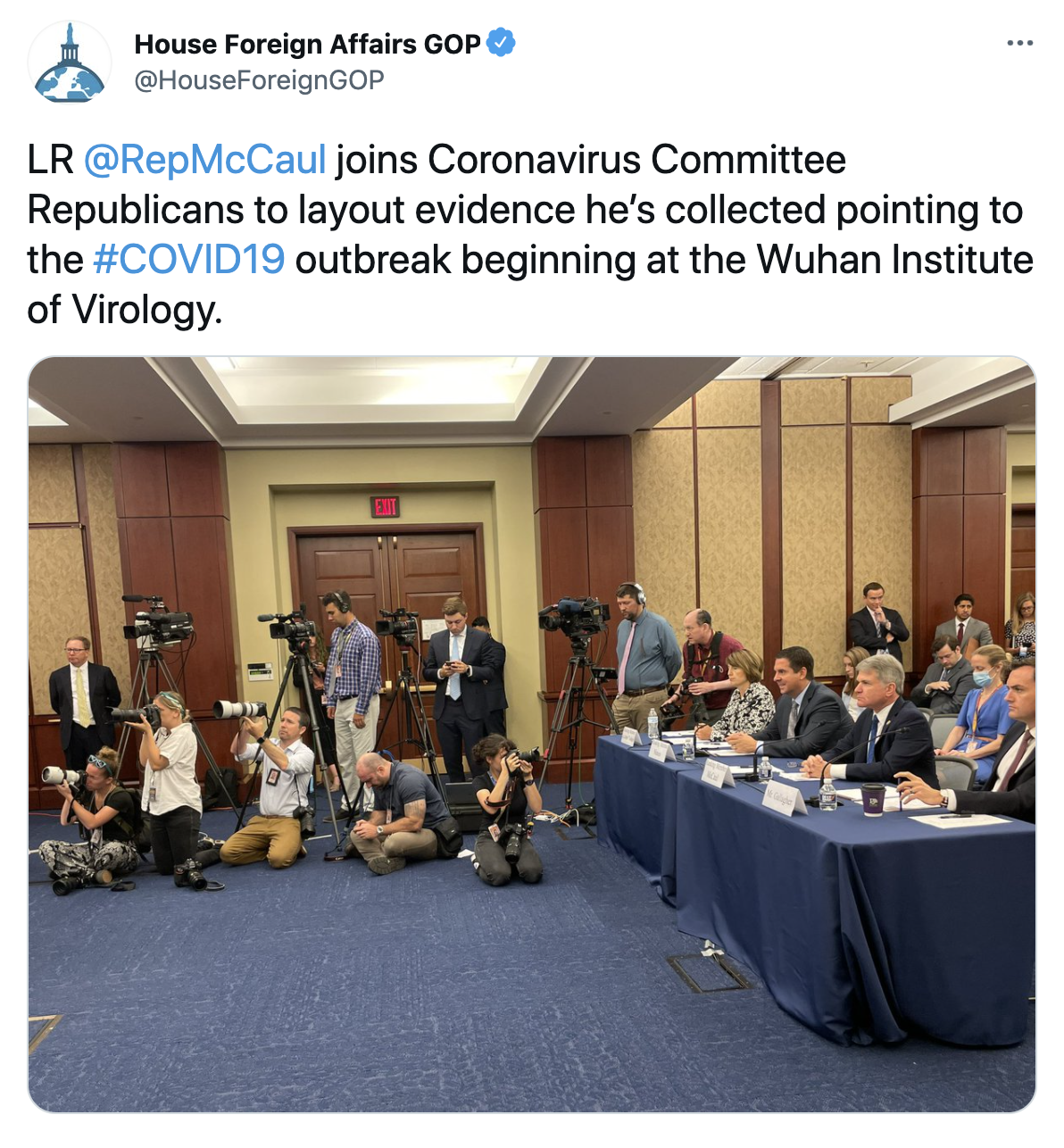 Rep. Mike Gallagher (R-Wis.) emphasizes Republicans’ commitment to getting to the truth about the virus’ origins. 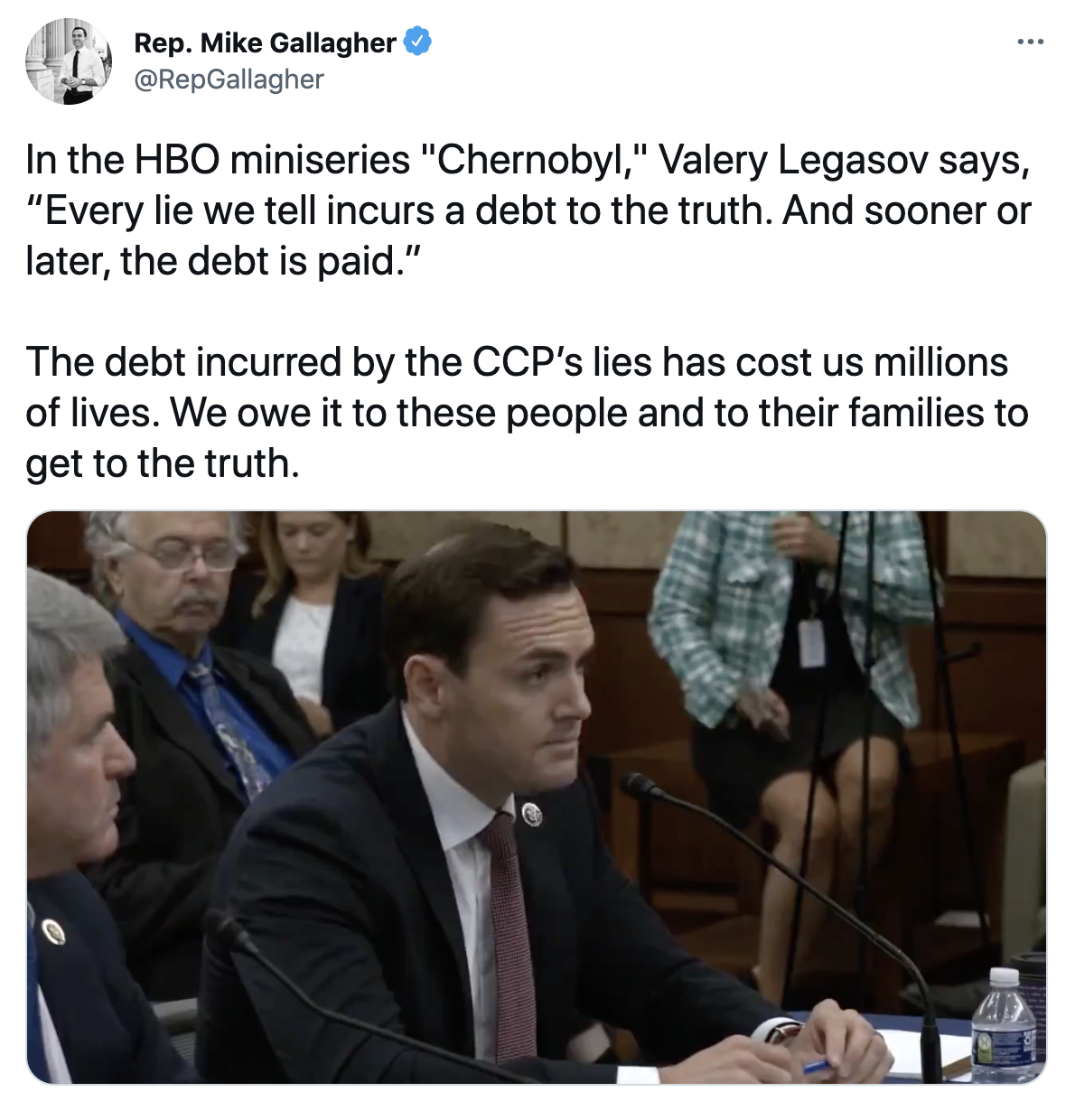