WASHINGTON, D.C.— House Republican Whip Steve Scalise (R-La.) pressed Democrat Majority Leader Steny Hoyer today on claims Democrat members have made over the past two years involving a conspiracy theory that President Trump colluded with Russia to win the 2016 election. Whip Scalise echoed the call from Republican members of the House Permanent Select Committee on Intelligence for Chairman Schiff to either produce evidence of collusion or step down, given his prolific media appearances during which he told the American people that there was “plenty of evidence of collusion.” 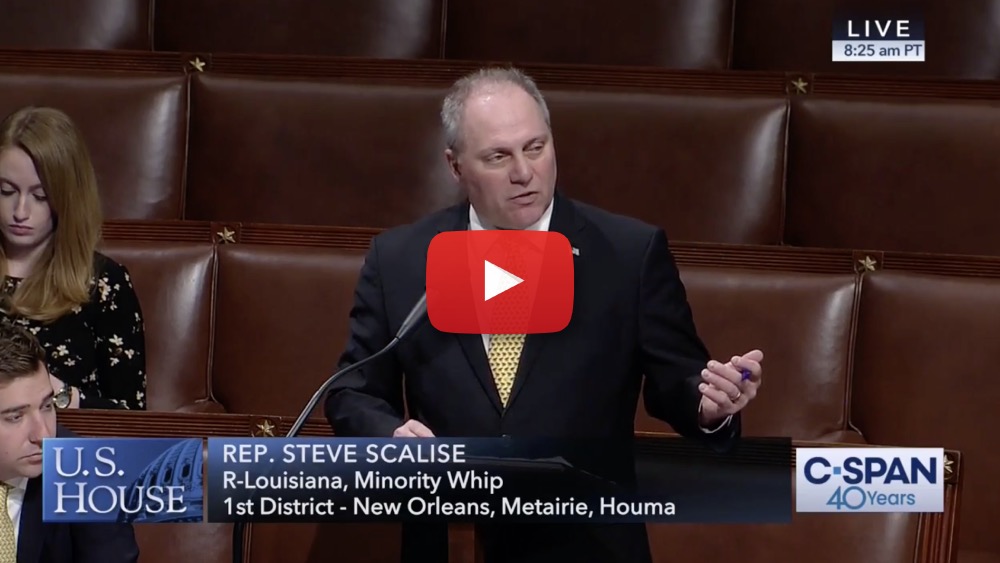 “But let’s be clear. For the last two years, we heard this clarion call that there was some collusion between the President, or his family, and Russia. We heard all these talks of impeachment and everything on down from the highest levels.

“Including the Chairman of the House Intelligence Committee, who went multiple times on national TV and said there was more than credible evidence of collusion. And finally, everybody was waiting on the Mueller report, many were hanging their hat going ‘it’s going to show all these things, there’s going to be lists of indictments.’

“Go look at all the tape from every national TV show you can imagine, of some of the most outlandish claims that were made and now the Mueller report comes out and it’s clear those claims are baseless. There was no collusion.” 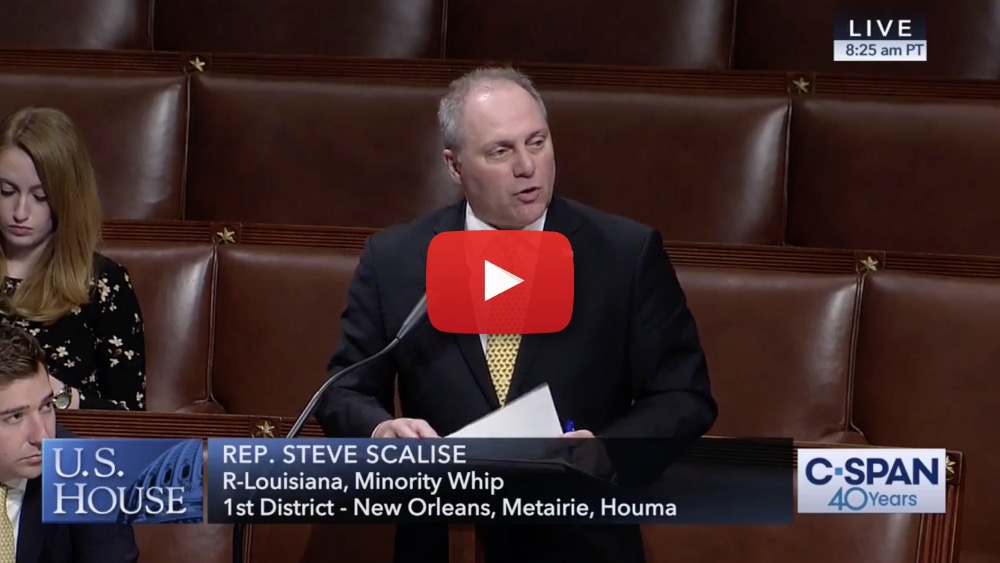 “So when Chairman Schiff says, quote, ‘more than circumstantial evidence’ that he’s seen that associates of President Trump colluded with Russia. In August, quote, ‘I think there’s plenty of evidence of collusion or conspiracy in plain sight’, and even now that the Attorney General makes it very clear there was no collusion, the Chairman of the Intelligence Committee will not recant his previous statements that have been discounted.” 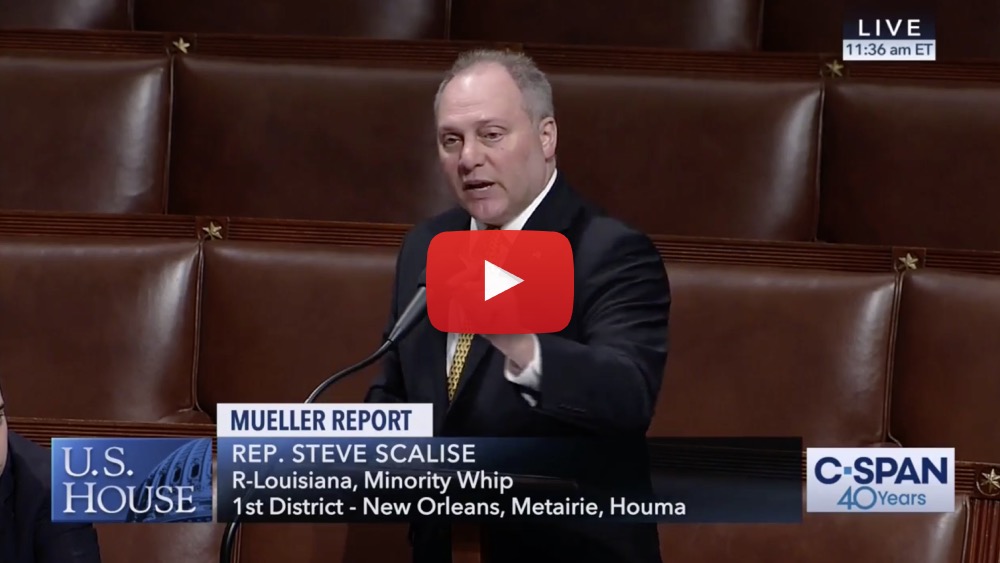 “In the end when we review the report, we have seen the summary, if people are still hoping that there is some mystery indictment out there, [the special counsel’s office] said there are no further indictments.

“They said there was no collusion with the presidential campaign. What time is your side going to acknowledge it didn’t happen? If you want to change the results of the presidential election, the results are changed at the ballot box. That’s how we resolve it in America. We don’t try to find something on a President that doesn’t exist. We have done oversight. You have done oversight.

“The Mueller investigation was the ultimate oversight for 22 months, and it rooted out and found there was no collusion between the President and the Russians. Maybe some people are disappointed to hear it. We should all celebrate that as a country.

“We all ought to be concerned that no President of the United States is targeted by an intelligence agency or by a Congress or a majority or a minority because they don’t like the results of the election so they are going to abuse power to go and try to take them down. That’s not the way we do it.” 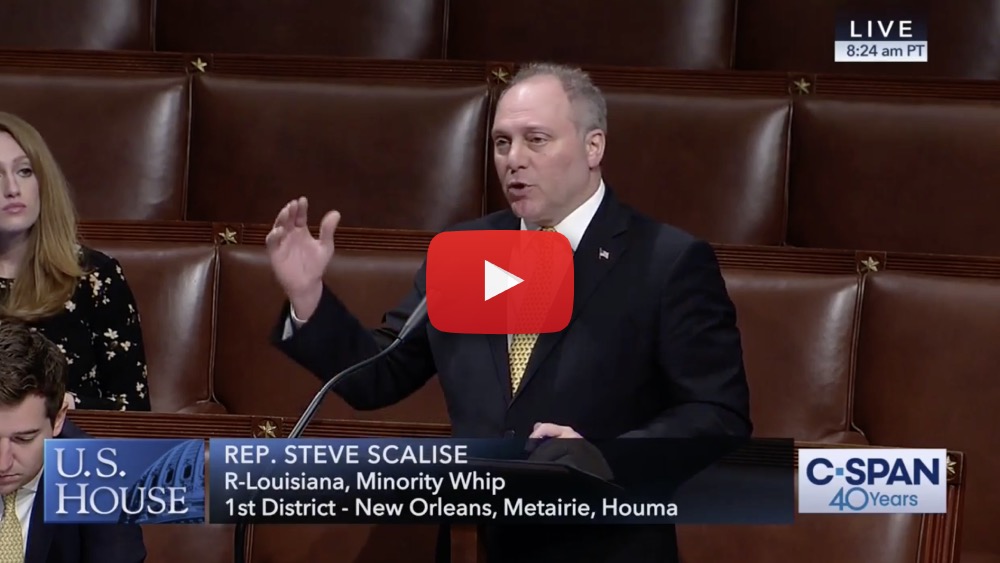 “This idea that maybe some other attempt to go and harass the President and his family will find something else – it gives credence to the claims it was a witch-hunt.

“It’s time for us to focus on the real problems of this country. It’s also time for us to hold people in our intelligence agencies accountable who showed up at their job with a partisan agenda. F.B.I. or C.I.A., any intelligence agency is no place for you to bring your political agenda. We all have political views. If you put that badge on and you accept that responsibility, and then you use that position to abuse your power, we all ought to call on it to be rooted out. I hope it is rooted out.

“If there were abuses of the FISA process – which is a very important court, has a very narrow focus to protect the national security of this country – if the FISA Court was abused by people in positions of power because they wanted to carry out a political agenda, because they didn’t like the results of the 2016 presidential election, that’s not the place for it.”