WASHINGTON, D.C.—House Republican Whip Steve Scalise (R-La.) joined Fox News Channel’s Outnumbered Overtime to discuss Speaker Nancy Pelosi’s violation of the House rules yesterday and her caucus’ decision not to enforce the rules on the Speaker, a clear statement that Democrats do not hold themselves to the same standard as all other members of the House. Whip Scalise urged the Speaker to end the constant personality attacks and harassment of the President so Congress can get back to work on the important issues Americans actually care about, like security, trade, and health care. 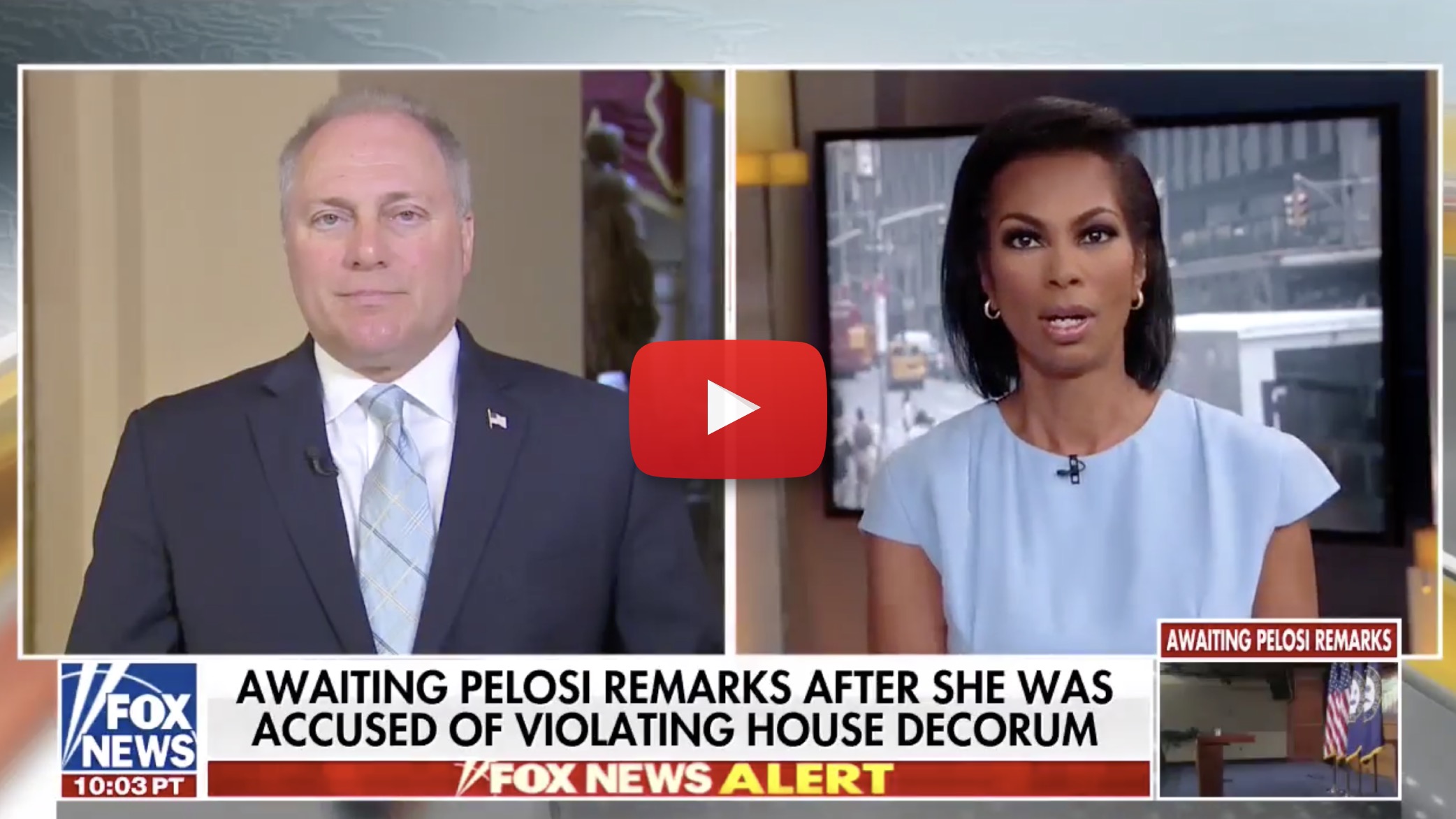 On Speaker Pelosi violating the rules of the House:

“It’s a shame that Speaker Pelosi kind of lost control of her speakership yesterday when she broke the House rules. She actually had to force her members back to vote to allow her to come back and speak again because of the violation of the rules of the House. Basically, what they’ve said is the rules shouldn’t apply to Nancy Pelosi that apply to everybody else. That’s not the way things are.”

On Democrats’ constant harassment of the President and failure to get things done that matter to the American people:

“They have to stop this drumbeat every single day towards impeachment, of harassing the President, his family, his staff. Today, you’re seeing more legislation on the Floor to go after members of his own staff. They want to admonish [Attorney General] Barr because he didn’t break the law. To comply with what they said would’ve required him to break the law. This is ridiculous.

“People want us to be focusing on real issues. There is a crisis at our border right now, as we speak, and they won’t address that problem, the broken asylum laws that are causing thousands of people to flood across our border every single day. They won’t work with the President to fix that, to lower drug prices. They want to just keep harassing him and his family, and I think people are fed up with it.”

On “the squad’s” control of the Democrat Party:

“If you think about many of the anti-Semitic things that some of those members of Congress said. Just last week, [Rep. Ocasio-Cortez] called Speaker Pelosi a racist. Where are the admonitions for those kinds of things? They’ve never been willing to stand up against their most radical elements of their caucus, ‘the squad,’ and the others associated with them. Frankly, they are all part of that socialist Democrat Party now because they are condoning that kind of approach to government.

“By the way, when you look at some of the things that have been said towards this President. They said he colluded with Russia when he never did. You even have some of them saying that people that are coming across the border illegally are being forced to drink out of toilets. That’s not even happening, yet they continue to say these kinds of false and degrading things and knocking our country every single day. Why not work together with Republicans and Democrats to solve real problems that are affecting hardworking families?”

“People are tired of them fighting amongst themselves and fighting for power. That’s really what it’s all about.”

“It’s all about fighting for more power. Those that have power want even more. Families are saying, ‘Just help us lower drug prices.’”

On Speaker Pelosi’s refusal to hold votes on bipartisan legislation that would solve real problems:

“…they have threatened other Democrats in their primaries. You have these rank-and-file Democrats in swing districts that are scared to death to cross AOC and her squad because they feel like she will take them out in their primary and she has threatened to do just that. In the meantime, they are not bringing real legislation to the Floor.

“There are bipartisan things being done to lower drug prices, but Speaker Pelosi won’t even bring that to the Floor. USMCA, we have a real opportunity to get a better deal with Mexico and Canada. The President wants it. They want it. The unions want it. Most Democrats want it, yet that won’t even be brought to the Floor because we have got all of this foolishness going on.”

On consideration of USMCA in Congress:

“There are a lot of things at play. Canada wants to get this done. They have elections coming up in October. You don’t want this to get bogged down in their elections. Mexico has already passed it. It’s a better deal for America. Look at the state of Wisconsin, for example, or Michigan. There are a lot of areas of Canadian markets that are closed to American products and this allows us to sell more American products into Canada, into Mexico. They won’t bring it to the Floor. I was just with Ambassador Lighthizer earlier. He’s working hard to get this done. Hopefully we can. But it should’ve gotten done months ago. Let’s stop the foolishness on the Floor. Use the Floor to help hardworking families, not to settle personal disputes.”

On the need for Congress to rise above personality attacks and deliver results for the American people:

“I think [Speaker Pelosi] ought to address that because it wasn’t us alone that said she broke the rules. The Majority Leader is the one who actually took the chair because another Democrat vacated the chair. The Majority Leader is the one who made it clear that she did break the House rules. She ought to own up to that and just say, ‘Let’s move on. Let’s be better than this. Let’s actually focus on policy.’

“Stop the drumbeat of bills and legislation and resolutions that aren’t going anywhere that are just designed to attack people based on personalities. We have real bipartisan bills, things that can get done to lower drug prices. We just passed a bill out of Committee earlier today to stop all these spam phone calls that come in, the robocalls that people get that annoy them every single day. There was a bipartisan agreement on that. Those are the things that should be on the Floor being debated to help hardworking families, not the personality disputes and the fights over who gets more power.”