TOPLINE: There’s a reason why President Biden’s poll numbers are plummeting: Democrats’ far-left, socialist policies are hurting middle class families, destroying the economy, raising our cost of living, and damaging our relationships with allies abroad. In Joe Biden’s America, unvaccinated and untested illegal immigrants are welcomed into the United States, but Border Patrol agents face termination if they do not get vaccinated, household energy costs and the price of everyday goods have skyrocketed, our supply chain is broken, leading to empty shelves at the grocery store, and Americans are still stranded in Afghanistan. The American people continue to suffer because of President Biden’s disastrous leadership.

Biden Refuses to Solve The Crisis at Our Southern Border

The Biden Administration’s open-door, pro-amnesty policies are causing hundreds of thousands of migrants, thousands of pounds of illicit drugs, and hundreds of criminals and sex offenders to unlawfully enter the United States.

Over 1.4 million illegal immigrants have been captured by federal and state law enforcement officers since February 2021.

The number of illegal immigrants entering the United States at the southern border is at a record 30-year high.

When added together, the total number of illegal immigrants captured since Biden assumed office surpasses the population of the ninth-largest city in America.

There were roughly 192,000 apprehensions at the southern border in September. This is a 233 percent increase compared to September 2020.

How can Democrats support vaccine mandates on the American people but not for illegal immigrants? 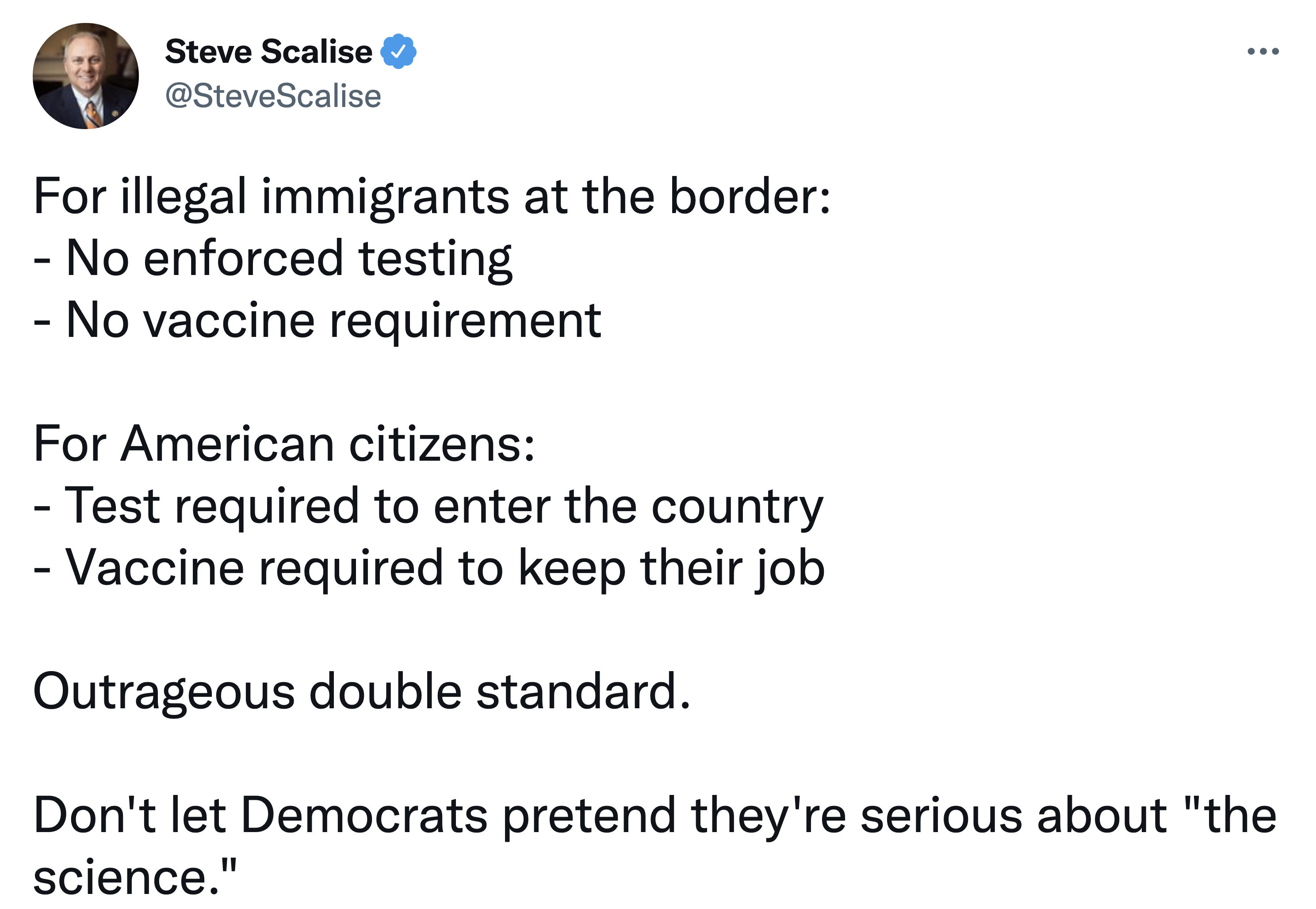 President Biden is focused on firing unvaccinated Border Patrol agents instead of addressing the thousands of Central Americans, South Americans, and Haitians that are heading to the U.S. border right now.

The world knows that the United States’ border is open.

Why is the Biden Administration choosing far-left immigration policies over the safety and security of the American people?

Rising Inflation is Forcing Americans to Pay More for Everything

Inflation is at a 13-year high, and this disproportionately hurts lower-income families. Prices are rising faster than paychecks.

President Biden’s inflation crisis is forcing the average family to spend an extra $175 per month on routine expenses.

These rising costs are not going away. In an interview with CNN’s Anderson Cooper, Treasury Secretary Janet Yellen said that inflation would not decrease until the “second half of next year.”

Skyrocketing inflation is strangling our economy, and the American people are suffocating under the weight of President Biden’s out-of-control spending. 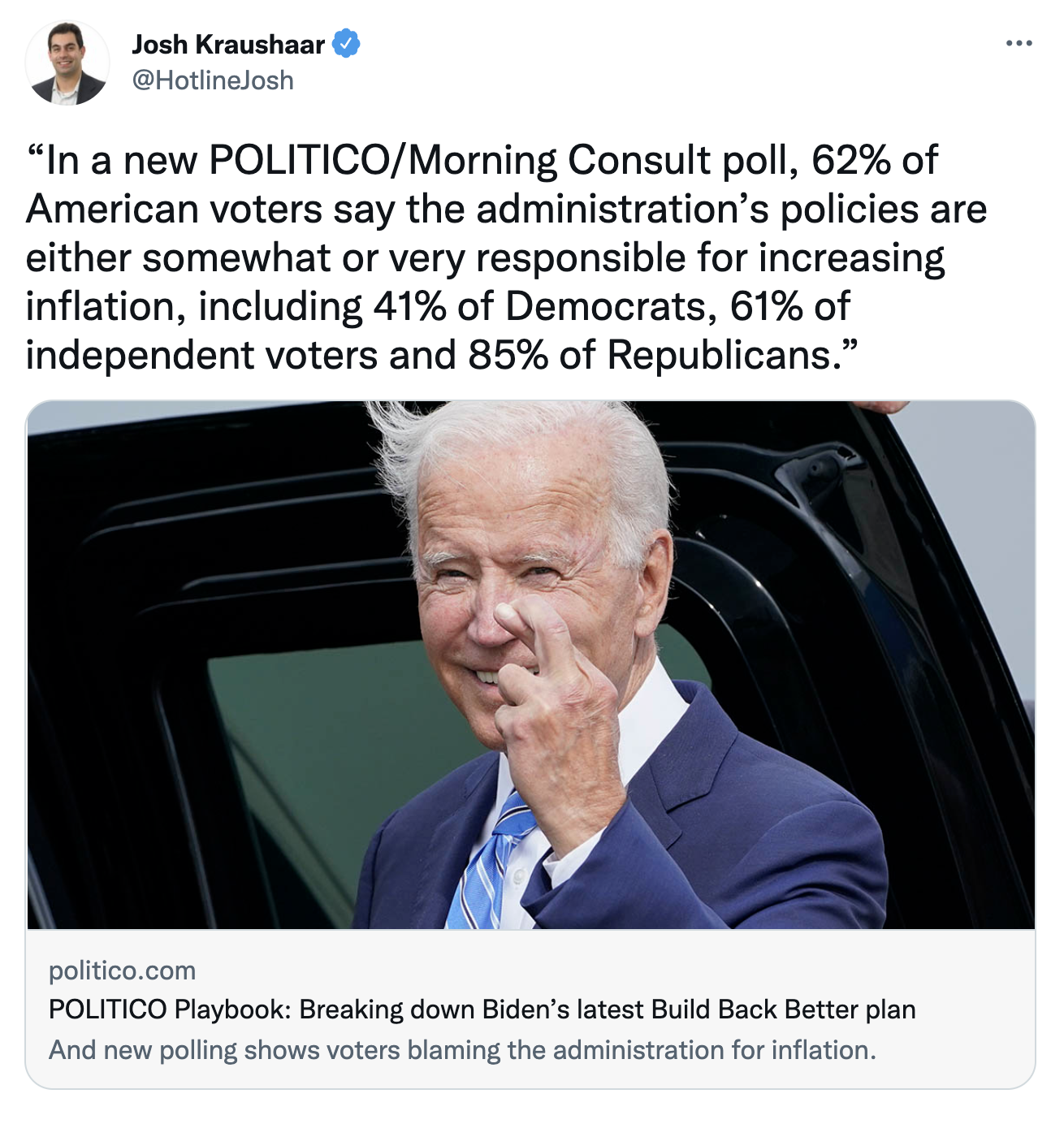 Klain’s old tweets are coming back to haunt him.

In March 2018, in response to then-Vice President Mike Pence’s remarks about the average family of four benefitting from tax cuts, Klain tweeted, “Will he hold up a Campbell Soup can and argue that price increases for basic food items don’t really hurt the middle class? Because I think that is the Trump admin economic message of the day.”

Because of Democrats’ rampant inflationary spending, Thanksgiving will be more expensive than ever before. 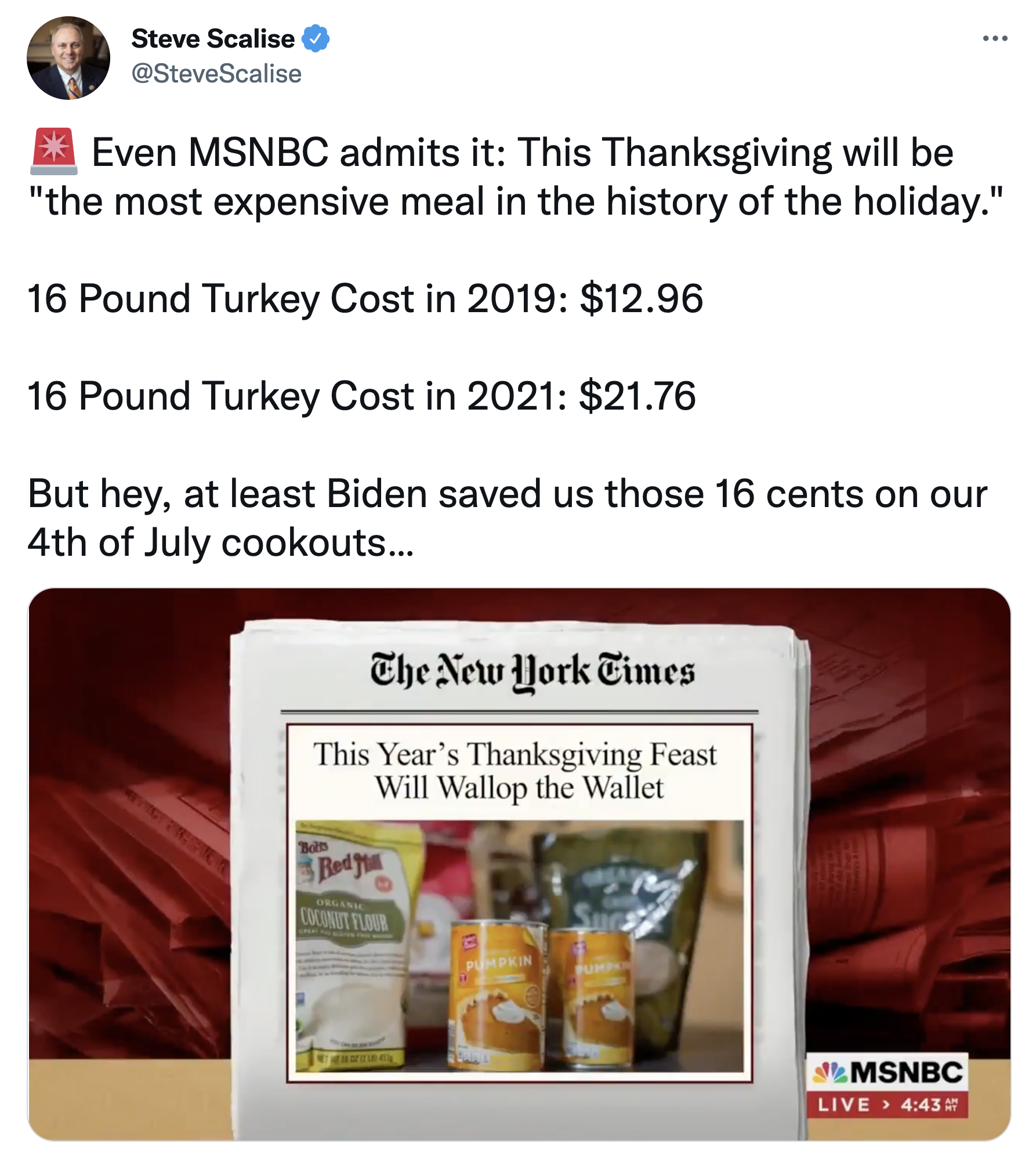 Gasoline and food prices will continue to skyrocket unless Democrats abandon their multi-trillion-dollar tax-and-spending spree.

Low-income and middle class families throughout the United States are suffering because of President Biden and Congressional Democrats’ short-sighted, costly, green energy policies.

Gas prices are at a seven-year high, and President Biden only has himself to blame.

On his first day in office, President Biden revoked the Keystone XL pipeline permit leading to 2,000 American workers immediately losing their jobs. Killing this essential project eliminated a reliable source of crude oil from our Canadian allies and means more than $2 billion in wages will go unpaid to American workers, and rural communities will lose $100 million in property tax revenues.

How can President Biden shut down the Keystone Pipeline and kill American jobs, but then do nothing to stop Russia’s Nord Stream 2 pipeline – which was subject to crucial sanctions that Biden waived – and increase our dependence on Russian natural gas?

The Energy Information Administration estimates families can expect to pay an average of $746 for their home-heating bills over the next six months. This is a 30 percent increase compared to last year.

Europe’s energy crisis, which was primarily caused by green energy mandates and near-total reliance on natural gas imports, demonstrates the shortsighted nature of Biden’s policies. Countries are competing for natural gas, and Vladimir Putin is withholding crucial supplies until the European Union makes political concessions to Russia. Meanwhile, President Biden has made it more difficult to produce, transport, and export U.S. natural gas, which would bolster the United States economy and provide a stable, cleaner fuel source for our European allies.

If Americans want record-high gas and utility prices with no end in sight, and an over-reliance on Russia for natural gas, they should embrace Democrat-led energy policies.

America cannot afford to drive itself into the same dire situation that Europe currently faces. Biden can and should restore American energy independence by helping small businesses, lowering inflation, and taking advantage of our rich energy resources to deliver affordable energy prices for hard-working Americans.

Biden Has No Feasible Plan to Solve Our Supply Chain Crisis

President Biden has failed to address our supply chain struggles and ensure that goods are transported safely and efficiently throughout the United States and worldwide.

Materials and equipment are not being sent to factories as scheduled, shipments of finished products aren’t reaching distributors, and congestion at ports and other transportation bottlenecks are making it nearly impossible for shipments to arrive in stores or your doorstep on time.

During our worst transportation crisis in years, Transportation Secretary Pete Buttigieg has been absent while his agency is crumbling under the weight of the supply chain crisis.

President Biden ordered that ports remain open 24/7, yet Secretary Buttigieg has yet to address labor shortfalls or meet in person with trucking and operating executives.

Now, Secretary Buttigieg has said that our supply chain problems will continue into 2022.

Regular Americans are paying the price and experiencing the consequences of the Biden Administration’s failing economic and transportation policies.

One month earlier, after signs and reports that jihadists were capitalizing on reducing U.S. forces in the Middle East, a reporter asked President Biden if it was inevitable that the Taliban would take over Afghanistan. President Biden responded: “No. It is not.” 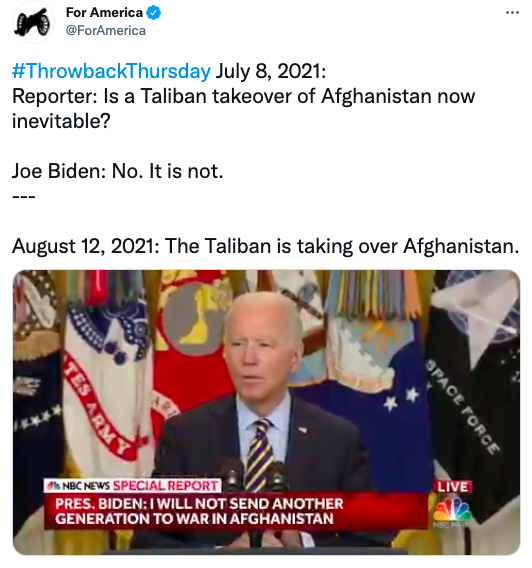 President Biden’s poor judgment has fueled the rise of the Taliban, stranded Americans overseas, harmed our allies, and put women and children in Afghanistan in danger.

In the military’s hasty exit, there were billions of dollars worth of weaponry left behind.

The Taliban is now armed with state-of-the-art military equipment and is selling extra pistols, ammunition, and rifles to the highest bidder – which is often Afghan arms dealers.

At a press conference at the end of August, U.S. Secretary of State Anthony Blinken said that there were less than 200 American citizens who were trapped in Afghanistan and wanted to leave.

When he testified before Congress in September, Secretary Blinken asserted that there were roughly 100 American citizens still in Afghanistan.

That was a lie.

In October, the State Department told congressional staffers it has been in contact with 368 Americans who remain in Afghanistan with 178 who would like to return to the United States.

The Biden Administration must be held accountable for the American citizens and Afghan civilians that they left behind.

Make no mistake: the Taliban’s resurgence in Afghanistan is because of President Biden’s incompetent foreign policy strategy.

BOTTOM LINE: President Biden, who campaigned on promises to unite the country, is choosing to ignore the crises facing the American people. Democrats’ consistent efforts to dismantle President Trump’s successful border security and immigration policies, along with their reckless energy initiatives and foreign policy agenda, have resulted in absolute chaos at home and abroad. Unlike President Biden, Speaker Pelosi, and their socialist allies, House Republicans will never turn their backs on the American people.