TOPLINE: Joe Biden and Nancy Pelosi have made it clear that they support left-wing mobs and protesters over the brave men and women in law enforcement who keep us safe. House Democrats are reaping what they sowed: an increase in murders, assaults, robberies, and carjackings.

While Democrats Attack Police Officers, Crime is on the Rise

As crime is spiking cities across the country, out-of-touch Democrats like Rep. Alexandria Ocasio-Cortez are dismissing rational fears of increasing crime as “hysteria.” 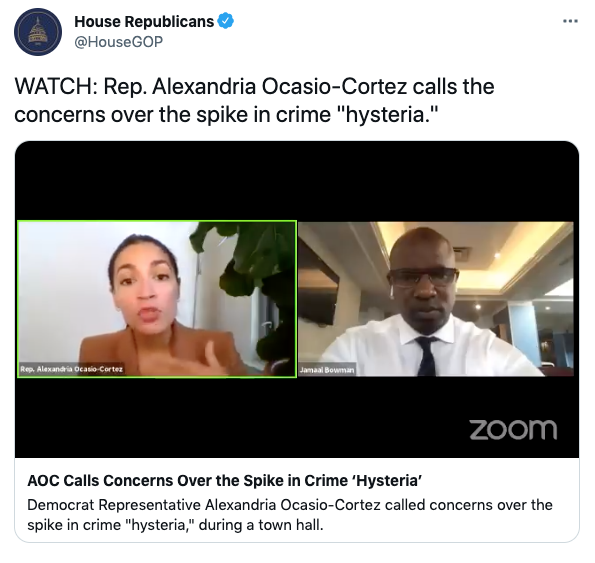 Here’s the truth: we are less safe in Joe Biden’s America. 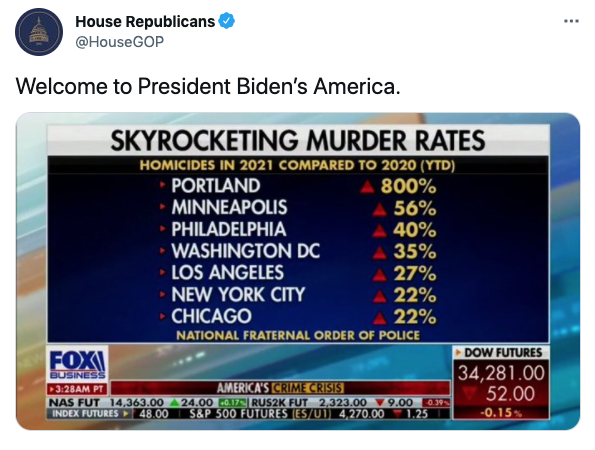 Our police officers, and their families, make enormous sacrifices so that we are able to work, live, and raise our families in the safest communities possible.

Instead of thanking and honoring these brave law enforcement officers for putting their lives on the line, House Democrats have fought to defund police departments and labeled them as “rotten” and “racist.” 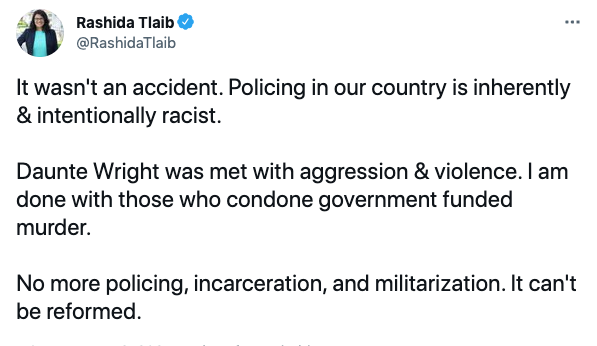 Democrats’ aggression against the men and women in blue has continued at a time when crime is surging. Compared to 2020, murders and shootings in 2021 have spiked across the country. 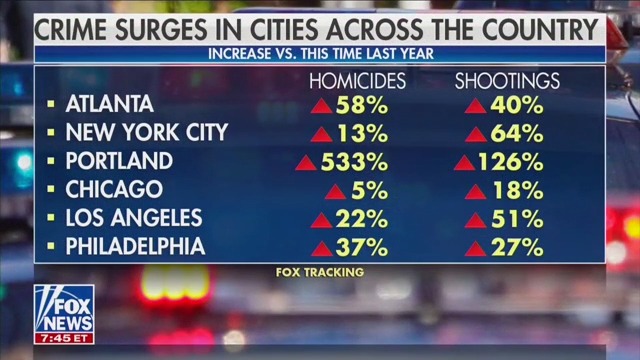 While Speaker Pelosi may try to distance herself from Representatives Omar, Pressley, Ocasio-Cortez, and Tlaib’s calls to defund law enforcement, it was the Speaker herself who irresponsibly referred federal law enforcement officers in Portland as Nazi “stormtroopers” last summer.

This leaves thousands of police departments struggling to hire new officers while crime is surging.

In a 2002 op-ed, Joe Biden wrote, “And what works in the fight against crime? It’s simple – more police on the streets.”

Democrats, with their allies in the mainstream media, are attempting to rewrite history.

The Biden White House is now trying to pin the far-left “Defund the Police” movement on Republicans instead of the radicals within their own party.

Speaking to Fox News’ Peter Doocy, White House Press Secretary Jen Psaki doubled down on the false narrative that Republicans are the ones who do not stand with law enforcement because they did not vote for President Biden’s trillion-dollar American Rescue Plan. 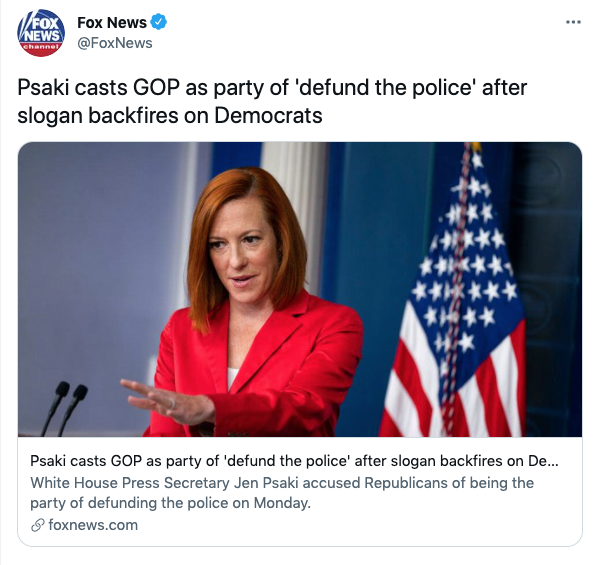 This could not be further from the truth.

In June 2020, House Democrats voted against Representative Pete Stauber’s JUSTICE Act. Representative Stauber, a former police officer, introduced his bipartisan legislation to increase transparency, accountability, and performance within our police departments so that law enforcement officers are better prepared to protect and care for the communities they serve.

In September 2020, Speaker Pelosi rammed H.R. 925 – Heroes Act 2.0 through the House of Representatives. This legislation defunded the police by removing $600 million from the original Heroes Act intended for the COPS Hiring program and state and local law enforcement assistance.

In March 2021, House Democrats voted against recognizing the dedication of the men and women of law enforcement and condemning calls to “defund,” “disband,” “dismantle,” or “abolish” the police.

Earlier this year, House Democrats refused to work with Republicans and passed a dangerous anti-policing bill that doesn’t focus on enhancing transparency, reinforcing accountability, and improving training for police officers.

This dangerous legislation eliminates qualified immunity for police officers, which would keep officers from making crucial, life or death decisions to stop a lethal threat; bans “no-knock” warrants in drug cases, even when the suspects are known to be violent or armed; and restricts law enforcement agency access to surplus military equipment, a vital resource in life-or-death situations and emergency response.

To add insult to injury, this legislation includes unreasonable bureaucratic red tape that will force thousands of cops to be laid off as a result of the increase in compliance costs for local police departments.

Criminals and gangs will capitalize on fewer law enforcement officers keeping our streets safe just like they did after Democrat-run cities defunded and tied the hands of their police departments last year. 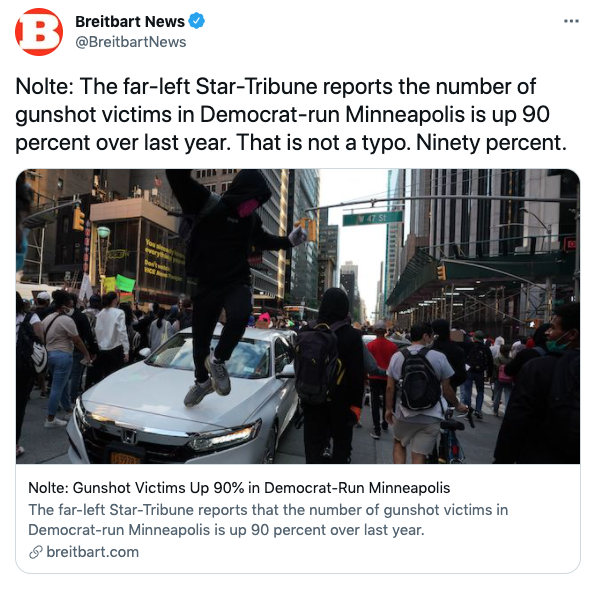 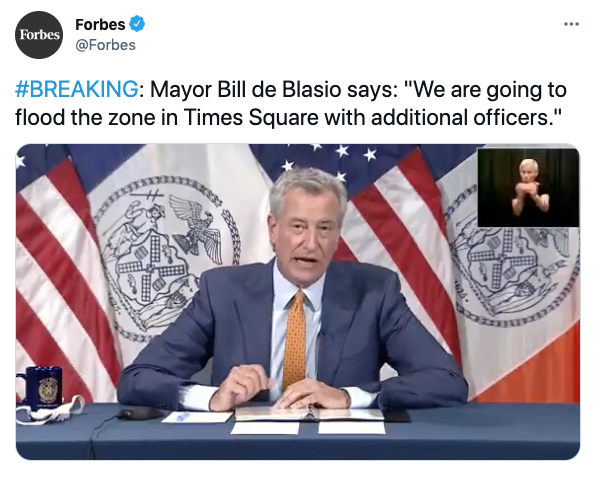 BOTTOM LINE: Democrats refuse to acknowledge that their reckless policies and inflammatory rhetoric make our communities less safe. Liberals and progressives are failing to see how defunding police departments in major cities and metropolitan areas have led to a historic increase in crime. The American people are less safe because Speaker Pelosi and House Democrats fought hard to defund the police and take away your guns.

Scalise and Fischbach: America is Ready for a World Without Roe v. Wade

One Year Under Biden: Authoritarianism and Failure