WASHINGTON, D.C.—House Republican Whip Steve Scalise (R-La.) joined Fox News Channel’s Sunday Morning Futures to discuss the future of border security negotiations, now that the government has been reopened. Democrats claimed they would only negotiate with the government open, and Whip Scalise called on Democrats to uphold this pledge and work with Republicans to secure America. Finally, Whip Scalise condemned Speaker Nancy Pelosi’s (D-Calif.) action to cancel the State of the Union and expressed his hope that it will be rescheduled soon. 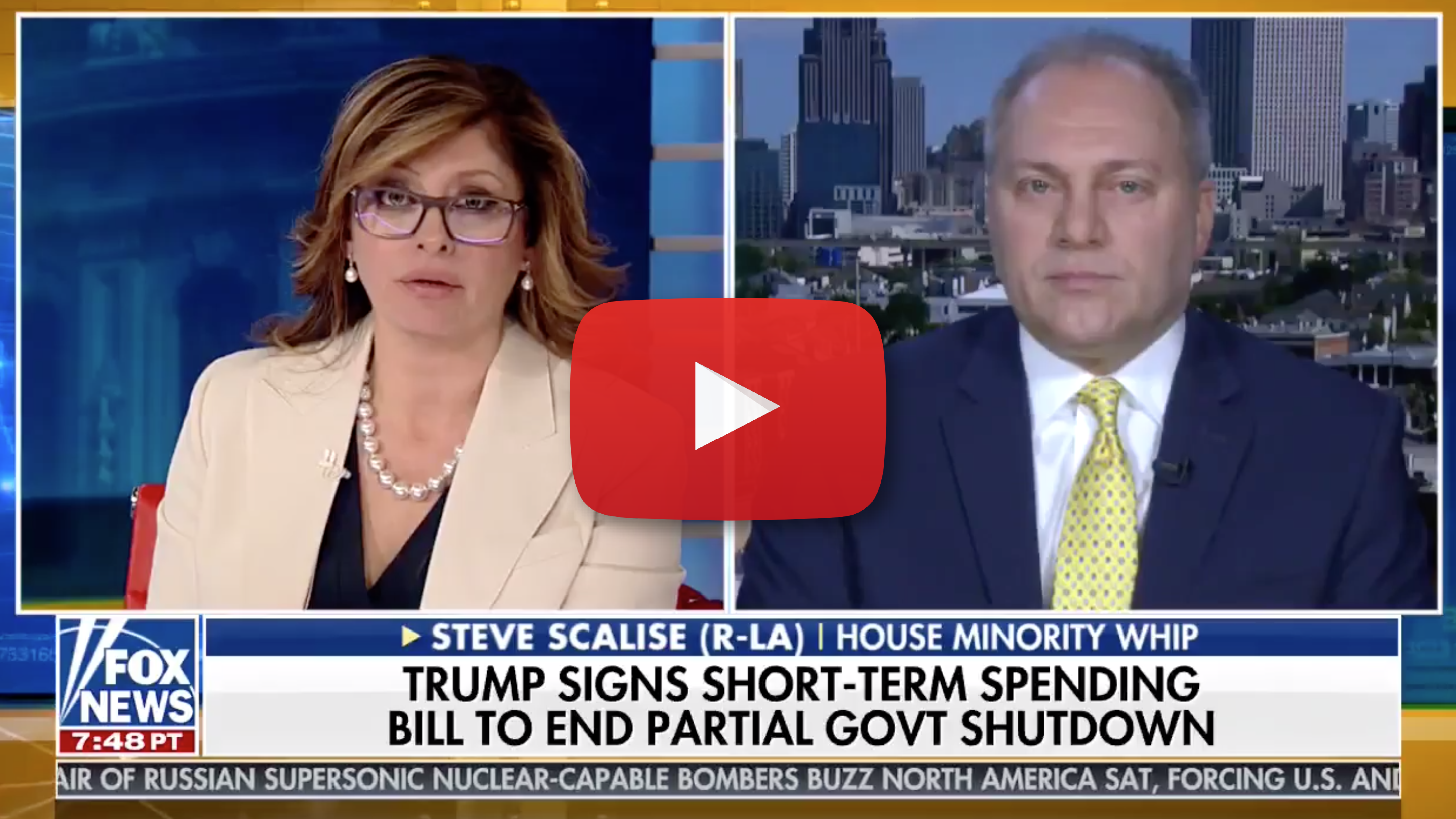 On the future of negotiations to secure the border and come to a long-term government funding agreement:

“I sure hope it’s going to be part of a final agreement. President Trump said, ‘We’re going to give you another three weeks,’ kind of calling the Democrats’ bluff who were saying, ‘We won’t negotiate while the government’s closed.’ Now the government’s reopened. We have to have a real specific conversation about how much money they will support.

“The President said—and it’s not the President, it’s our experts who protect the border who say, it’s going to cost $5.7 billion for all the technology including wall. What are the Democrats willing to support? They’re going to have to put a real number to paper now in these next three weeks.”

On the growing number of Democrats calling for a compromise that includes money for physical barriers at the border:

“I think we were starting to see fissures. In fact, you saw even the House Majority Leader Steny Hoyer saying physical barriers should be part of the solution. You had committee chairmen on the Democrat side saying give the President the money for the wall. I think this growing drum beat got Pelosi nervous.

“At the same time, she’s going to now have to confront it because in every negotiation I’ve been in, when we’ve had meetings in the White House with the President, when pressed on what amount of money will she support, she always said, ‘I won’t talk about numbers while the government’s shut down.’ Now the government’s back open. It’s time to get serious about these negotiations. Hopefully, there is a State of the Union that happens in the next two weeks, which I think there will be, and the President can make an even stronger case to the rest of the country. It’s that growing support across the country that, ultimately, will push more Democrats to our side.”

On Speaker Pelosi’s decision to cancel the State of the Union:

“Nancy Pelosi was holding the State of the Union hostage. Ultimately, the Speaker has to invite the President. The Constitution requires the President to give a State of the Union. That doesn’t mean it has to be in Congress, but it ought to be in Congress. I’m hearing similar things that February 5th is likely the date, but ultimately that’s something that’s up to the Speaker of the House if it’s going to be in the House chamber, which it should be.

“I thought it was disgraceful that she removed the State of the Union invitation that she had already issued to the President, to say that she was going to uninvite him. That had never happened before in the history of our country. I think Nancy Pelosi is afraid of the country hearing this message that the President has about why we need to secure the border.”

On Speaker Pelosi’s duty to reschedule the State of the Union:

“The American people deserve a State of the Union, and it ought to be in the House chamber. The Speaker of the House controls the House chamber. Nancy Pelosi, I thought, was very petty in uninviting the President from the original date that they agreed upon. I think she ought to do it quickly. I think early next week she ought to send a letter out formally inviting the President. February 5th is a date that seems to work well. Do that quickly, end this charade and, frankly, I think it’s something the American people look at in a very negative way when they look at Nancy Pelosi trying to hold the State of the Union hostage as part of this debate over border security.”